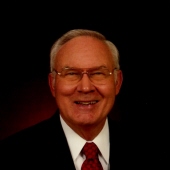 Coming from the Marietta area, Garnett had made Fannin County his home for over 20 years. He attended Young Harris College for 2 years on a music voice scholarship. Garnett was a U.S. Army Veteran serving mostly in France and Germany from 1959 to 1961. He then worked as a sales representative in the food industry for approximately 40 years before retiring from Retailing Marketing Associates.

He was a faithful follower of Jesus and a very active member of McCaysville First Baptist Church where he participated in the choir and often performed as soloist; he also had served as Sunday School Director. He was a member of the North GA Honor Guard and several veteran organizations, active in the Republican Party, served Fannin County as School Board Member and as Post 1 Commissioner, and was involved with other county school activities. He enjoyed fishing, gardening, camping, and was an avid Braves baseball, Falcons and Georgia Tech football fan. After many years, Garnett continued to stay in touch with his friends from his youth at Park Avenue Baptist Church and Roosevelt High School in Atlanta.

Arrangements entrusted to the Finch-Cochran Funeral Home of McCaysville, GA. You may send condolences to the family and sign the guest register at www.cochranfuneralhomes.com.
To order memorial trees or send flowers to the family in memory of Garnett Pearson Webb, please visit our flower store.