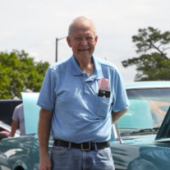 Cochran Funeral Home and Crematory of Blairsville announces funeral services for Mr. Loyal Gene Sprayberry, age 74, of Blairsville, who passed away on Sunday, October 27, 2019 at his home.
Gene Sprayberry was born February 3, 1945, the first living son of Dairy Farmer and WWII Combat Veteran L.C. Sprayberry, and Homemaker Joyce Sprayberry, near Anniston, AL. He grew up on a farm, with all the adventures a boy on a farm should have. He risked his own life to save his younger brother, Alan, from drowning at the age of only 7, which was to be one of the first of a lifetime of selfless acts for the benefit of others. As a young boy, he made a choice to accept Jesus Christ as his hope of salvation and strength. While attending Oxford High School in Alabama, he worked as a bagboy at Food Town Grocery, where he met a cute checkout girl, named Louise. They married in June of 1964, as he earned a Bachelor's Degree in Business Administration at Jacksonville State University, also in Alabama. At the time of graduation in 1968, their first child, Wade, was born. He went to work as a bank examiner for the FDIC in 1968, making friends and contacts in banking along the way. By 1970 They lived in Athens, GA, and their son Kelly was born. After a brief stint at Cornelia Bank, Leonard George, then President of Union County Bank, recruited young Gene Sprayberry, and in June of 1973, he began his 37-year career at the bank which eventually grew into United Community Bank.
That's what he did for a living, not who he was. Gene loved people much more than he loved "things." In spite of earning a good living, he drove modest vehicles, lived in a modest home, and related more easily with "regular people" than those of lofty station. He was keenly interested in old cars, but had realized early on in his life, that true satisfaction in life was really about LOVING people, and simply USING things, rather than loving THINGS, and using PEOPLE. HE derived great satisfaction in seeing others enjoy their lives. He invested of himself and his earnings into the things his wife and kids were interested in, and assumed a hand in facilitating the things that brought them joy, while spending very little on his own desires. Perhaps he did spend on his own desires, which were quite simply, predicated on the joy of others. He helped people split firewood, and often helped his close friend, Larry Lunsford work on building a wrecked car, not for a few hundred dollars from the sale of the car, but for the simple pleasures of friendship. He had stated that he initially felt stupid when acting as Junior Samples in the bank's "Banker's Hour" variety show, but he saw that the people in the audience just loved it, and it made them laugh and to forget about their troubles for a while. With that realization, he said it became a great opportunity to share happiness with many people at once. He was quick to share anything that he had when someone he knew of had a need. He literally gave his son Wade the shoes off his own feet, just this past year, when he saw holes in his boy's work boots. He said he had another pair in his car anyway. It was no accident, he sought to give him a new pair of shoes, and wearing the same size, had brought a pair to replace them so his offer would be more readily accepted. He set up scenarios like this with some regularity. His sons both agree, that for all of their lives, they are certain that he only ever sought their greater good and happiness. I think that the same applies to others who were fortunate enough to cross paths with this loving and benevolent man. It's difficult to summarize the life of a person like Gene, but it can be said that his philosophy was that, "it's nice to be important, but it's more important to be nice." People will miss his hugs and his cheerful smile and pleasant demeanor. The world will become a darker place, if we let it, but his enduring wish for each person who reads or hears this, is that they would take every possible opportunity to share a smile, an opportunity to encourage another, or an act of charity and goodwill from the heart, and to take the seed of kindness that he planted in everyone he came in touch with and let it take root within so that friendliness becomes a natural reflex, and more than an attitude, but an action towards building up our fellow human being.

Gene was preceded in death by his beloved wife, Catherine Louise Sprayberry; two brothers: William Sprayberry and Alan Wade Sprayberry. Gene was dearly loved, respected and will be greatly missed by all who had the pleasure of knowing him. He leaves behind the following family members: son and daughter-in-law, Wade Louis and Angel Sprayberry of Blairsville; and son and daughter-in-law, Kelly Gene and Tracy Sprayberry, of Marietta, Georgia; five grandchildren: Nathan Sprayberry, Mallory Sprayberry, Selina Waterhouse, Kassy Guffey, and Michael Victoria; two great grandchildren: Emma Guffey and Ellie Guffey; many cousins and other relatives also survive.

Visitation hours will be held at Cochran Funeral Home in Blairsville as follows: Friday, November 1st, between the hours of 11:00 a.m. until 3:00 p.m.; and then from 5:00 p.m. until 9:00 p.m. Gene hated wearing a tie....so he had requested that no one have to wear ties to his visitation or funeral!

Funeral services have been scheduled for Saturday, November 2nd, to be held at Harmony Grove Baptist Church at 2:00 p.m. with Rev. Scotty Jarrard and Rev. Jerry Karnes officiating. The body will lie instate at the church from 1:00 p.m. until 2:00 p.m. Burial will follow in Union Memory Gardens Cemetery.

If you wish to do so, memorial donations may be directed to Harmony Grove Baptist Church, 1008 Town Creek School Road, Blairsville, Georgia 30512.