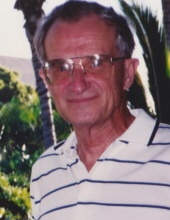 Mr. George Houdeshel, age 93, of Blairsville, Georgia passed away on Thursday, January 6th, 2022, at his home. He was a resident of Blairsville for almost 50 years.

Mr. Houdeshel was born in Baltimore, Maryland, and married Magdalena Agnes Schlisselhuber in Munich, Germany on March 22nd, 1950 while a member of the U.S. Army-Air Force. Mr. Houdeshel was one of eight children. At age eight he started helping his dad who was renowned for repairing church pipe organs. He supplemented that income by singing in the boys' choir at church. It paid 25cents in those days.

He graduated from the University of Maryland with a degree in engineering. When the Queen of England came to the University of Maryland to watch a football game in 1957, Mr. Houdeshel and his Kiwanis Club presented a child's University of Maryland football uniform to Prince Charles. While working for Goodyear in Akron, Ohio, he got recruited by Lockheed Marietta Aircraft to work on the first nuclear powered airplane still on that drawing board. Upon retirement he did consulting work for Lockheed all around the world - Australia, Europe, Middle East, South Africa, and Hawaii. He jokingly said Hawaii needed a lot of consulting. He co-authored a college textbook called "Building Executive Information Systems". He ran the Marshall's Motel in Virginia Beach in cooperation with the Association of Research and Enlightenment headquarters there. He was a Senior Warden of St. Jude's Episcopal Church in Smyrna, Georgia, and helped found its first kindergarten. He ran the Marshall's Motel in Va. Beach in cooperation with the Association of Research and Enlightenment headquarters there. He was a member of First Methodist Church in Blairsville and at its Oasis meetings taught Bridge classes with Barbara Lewis. He volunteered at the Union County Hospital Auxiliary. He loved being part of the Union County Schools mentoring program. He would teach troubled students the game of chess while getting them to talk. Mr. Houdeshel was a great speaker who captivated and motivated students and adults alike through his own example of getting kicked out of Baltimore City College High School. He had a sense of humor like no other - probably his greatest gift to all who knew him. George and Magdalena Houdeshel were the first to build and settle on Bucksnort Road in Blairsville and fought City Hall mightily to keep the name of Bucksnort.

He was preceded in death by his wife, Magdalena; and a close friend, Barbara Lewis.

Arrangements have been entrusted to the care of Cochran Funeral Home and Crematory of Blairsville. Please share your condolences with the family online at www.cochranfuneralhomes.com.
To order memorial trees or send flowers to the family in memory of George Andrew Houdeshel, please visit our flower store.