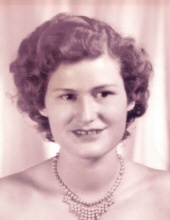 Gladys was born on November 22, 1934 and raised in Morganton, Georgia. Her early adult years were spent in Detroit as her first husband, Alvin Long and her brother, Frank worked there. She managed their funds and household as the men earned a living. Later, they began to work in the mines of California, Virginia, and Cuba, and she traveled with them. At the age of 35, Gladys became a widow, having to support her two young children on her own. With grit and determination, she went to vocational school, obtained a cosmetology license, and opened her own shop. She believed that you can have anything you want- if you are willing to work for it. She found love again and married Calvin Lunsford at the age of 60. They spent their "Golden Years" together until his death on Thursday, January 7th, 2021.

Gladys embraced her title as "Nana" and was so proud of her grandchildren and their accomplishments. She devoted her time in giving them wonderful experiences and memories to remember. She was always willing to do whatever activity the kids wanted, whether it be fishing or four-wheelers. Her home smelled of biscuits and cornbread, a pinch of this or dash of that- all made with love and no recipe needed. Her heart was full when her home was too, as she hosted many family dinners and holiday gatherings. Nana always made time to listen, eat blue-berries, and talk. Her laughter filled the room as many things just struck her funny. She would get so tickled, especially if she thought she had something on you. She enjoyed stringed instrument music and would often dance, her favorite being the Charleston. She had the heart of a servant and valued community. She deeply enjoyed helping the elderly and simply being good to people.

Funeral services have been scheduled for Tuesday, January 19th, 2021 at 2:00 p.m., to be held in the Chapel of Henry-Cochran Funeral Home in Blue Ridge with Rev. Wade Plott and Rev. Steve Rhoten officiating.

Arrangements have been entrusted to the care of Henry-Cochran Funeral Home of Blue Ridge. Please share your condolences and sign the online guest registry at www.cochranfuneralhomes.com.
To order memorial trees or send flowers to the family in memory of Gladys Edna Long Lunsford, please visit our flower store.