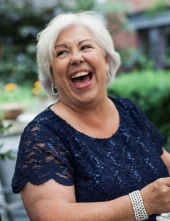 Mrs. Suggs was a native of Hiawassee, and a daughter of the late William Hubert Youngblood and the late Margie Neal Youngblood.  Besides her parents, she was preceded in death by her husband, Ricci Suggs; sister, Katrina Rodriguez; sister-in-law, Diane Stiles; and brother-in-law, Fairley Holden.

Diane was a friend to everyone and an adorer of Jesus.  She devoted her time to what she loved most - her family and dear friends.  As a beloved mother, wife, grandmother, sister, and friend she endlessly put others before herself. She could often be found lounging on her front porch amongst pots of flowers, chatting on the phone with any number of loved ones.  She was adored by so many because of who she was - compassionate, empathetic, accepting, open, warm, and full of love.  If you needed anything, she was there.  She had a great sense of humor and was just pure joy to be around.  She absolutely loved music, especially Bruce Springsteen and the blues!  One of her favorite things to do was share a morning cup of coffee with her daughters and granddaughters.  There is no better example of a person who has spent their lives serving others than Gloria Diane Suggs.

Funeral services have been scheduled for Tuesday, January 11th, 2022, to be held at 3:00 p.m., in the Chapel of Cochran Funeral Home in Hiawassee.  Burial will be in Laurel Hills Memory Gardens Cemetery. Gentlemen selected to serve as pallbearers are Neal Stamey, Tony Dearing, Keith Hyatt, Jordan Walburn, Barry Dearing and Jeremy Lester. Cooper Ledford will serve as honorary pallbearer.

Visitation will be held on Tuesday, January 11th, from 12 noon until the service begins at Cochran Funeral Home in Hiawassee.

Arrangements have been entrusted to the care of Cochran Funeral Home of Hiawassee.  Please share your condolences and sign the online guest registry at www.cochranfuneralhomes.com.

To order memorial trees or send flowers to the family in memory of Gloria Diane Suggs, please visit our flower store.