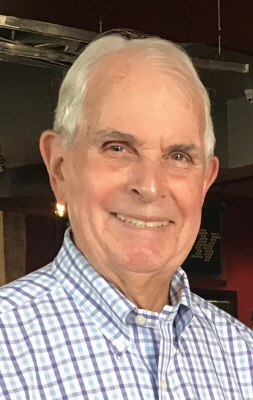 Our world lost its center on January 27,2021 when Glower Whitehead Jones suddenly passed away. He suffered a sudden heart aneurysm at his home in Blue Ridge, Ga in the arms of his wife, Joanna. Everyone knew them as an inseparable pair, and they were until the end.

Born in downtown Atlanta, Glower spent his childhood in Avondale Estates and until retirement lived in Ansley Park. Since then, home has been shared between Midtown and the mountains of Blue Ridge, GA. His parents were Samuel L Jones and Alma Powell Jones. Both preceded him in death as did his brother Dr. Waldo Powell and his son Marshall (Mark) Jones.

He was educated at the Baylor School in Chattanooga (54), Dartmouth College (58), and Emory Law School (63). He earned his Juris Doctor at Emory with distinction as a member of the Bryan Honor Society and served as editor in chief of the Emory section of the Georgia Law Journal.

Glower actively practiced law for nearly 40 years, first with Smith, Swift, Currie, McGhee & Hancock (1962 - 1965), then with Smith, Currie & Hancock LLP (1965 - 2001). He became partner in 1967, practicing in the newly developing area of construction law. He loved being a lawyer representing owners, general contractors, and subcontractors on projects throughout the United States, as well as multiple projects in Saudi Arabia. His courtly manner impressed judges, jurors and arbitrators, and his calm demeanor and probing questioning disarmed adverse witnesses. He also served as an arbitrator for numerous large construction disputes. Glower mentored many young construction lawyers and construction professionals, who carry his professional legacy into the next generation. For many years, Glower edited the leading treatise on American construction contract forms, and he authored dozens of legal articles regarding construction and arbitration issues.

Glower’s passion for the law extended worldwide. A member of the State Bar of Georgia, the American Bar Association, the International Bar Association, and a lifelong member of the Atlanta Lawyers Club. In the ABA he served as Chairman of the International Public Construction Committee. In the IBA Glower was head of the membership committee and International Sales Committee, member of the IBA Council Section of Business Law, and officer and trustee of the IBA Foundation. He also served as a member of UNCITRAL (United Nations Commission on International Trade Law). He was a Fellow of the Chartered Institute of Arbitrators, member of the Vienna Arbitral Center and the American Arbitration Association. Glower remained active in the IBA into 2021 and closer to home, he was dedicated to the Atlanta Lawyer’s Club, actively participating in Club activities with friends and colleagues to his death. The evening that he passed he was preparing for a Lawyers Club Book Club meeting, one that he would been loath to miss.

Glower loved Atlanta, and he gave back to the community. He followed in his father’s footsteps as an active member of the Board of Directors of the Carrie Steele-Pitts Home for abused and neglected children in Atlanta. During his tenure, the Home provided a safe haven for hundreds of children and significantly upgraded its facilities. Additionally, Glower served as Board President of the Metro Atlanta Boys and Girls Clubs, Florence Crittenton Home, Families First, and Gate City Day Nursery. He was also on the Ansley Park and Mayfair Renaissance HOAs, and the Peachtree Christian Church Board where he was a lifelong member. He was a member of the Commerce Club, the Atlanta Athletic Club, Ansley Golf Club and the Dartmouth Club of GA. After retirement in 2000 he traded his pin stripes and necktie for flannel shirts and khakis (still perfectly pressed), but the call to volunteer and serve the community remained. He loved to spend time volunteering at the Humane Society of Blue Ridge where he undoubtably left his mark.


He was a loving husband and father and a devoted friend to many. Forever the consummate gentleman, he made friends around the globe. Nothing pleased him more than to have a houseful of family or friends. If he and Joanna had more than two free nights, he would always say “let’s invite someone to dinner”. His law protégés became lifelong friends and part of the family.

Glower’s favorite things were travel, reading, music, and exploring Forest Service roads in his silver Jeep Wrangler. In retirement he continued his love of travel with Joanna to 88 countries, many multiple times and all 7 continents. A true Marco Polo! Even in Antarctica the penguins would call him friend. Indeed, the entire world has lost a dear friend.

Cochran Funeral Home handled arrangements. There was a private viewing for immediate family on Saturday, Jan. 30 in Blue Ridge. A memorial service at Peachtree Christian Church in Atlanta is scheduled for 2:00 on March 20, 2021. With COVID-19 restrictions it will be family only and will be live streamed. The family requests gifts in lieu of flowers, in Glower’s name, to Peachtree Christian Church Music Department or Heritage Fund, 1580 Peachtree Street, NE, Atlanta, GA 30309 and the Humane Society of Blue Ridge, 171 Mineral Springs Road, Blue Ridge, GA 30513. He was cremated and will be interred in the church’s columbarium.
To order memorial trees or send flowers to the family in memory of Glower W. Jones, please visit our flower store.