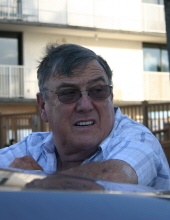 The Cochran Funeral Home & Crematory of Blairsville announces Funeral Services for Harold Dean Wimpey, age 72 of Blairsville who passed away on Wednesday morning, November 10, 2021 at his home.

Dean was a loving son, brother, husband, daddy, Pops and Popsie, but he was never Mr. Wimpey.

Dean grew up working hard on his family farm and after graduating high school he joined the US Air Force. While in the Air Force he served in Vietnam, primarily with the Jolly Greens, performing numerous rescue missions. There is a saying that the Jolly Greens are "one of a kind and go above and beyond what is asked of them". Dean carried that motto throughout his life.

Dean was a man of few words. However, when he spoke one should listen (DPA) because of his vast knowledge in so many areas. Dean would not ask someone to do something that he himself would not do. However, there was little that Dean would not do or drive over ;)

After Vietnam, Dean returned home to help with his family’s farm. Soon thereafter, he met and married his wife, Marlene. Dean started carrying the Sunday paper throughout Union County, as well as, working for Kimsey Egg as a field supervisor and driver. After a few years, Dean and Marlene, started Wimpey Poultry Company Inc . Soon Dean found himself raising 3 children with this wife while trying to grow a poultry service and transportation business- in addition to his own personal farming. Dean was the happiest when he was working in his tractor, but his children and grandchildren also made him happy but in a different way. Dean was very fortunate to pass some of his knowledge and love of his farm and business onto some of his family, so that his legacy will continue for years to come.


Funeral Services will be held at 4:00 pm on Sunday, November 14, 2021 from the Chapel of Cochran Funeral Homes with Pastor Wade Plott officiating. The family will receive friends at the funeral home from 2 p.m. until the service begins. Interment will follow at Trackrock Baptist Church Cemetery with Military Honors presented by the North Georgia Honor Guard. Gentlemen serving as pallbearers are: Kevin Hutson, Luis Fletes, Ray Brown, Mike Dersam, Glen Picklesimer, and Jonathon Cobb. Honorary Pallbearers will include Dean's Grandchildren and the Employees, Drivers, and Crews of Wimpey Poultry Company.

Arrangements entrusted to Cochran Funeral Home & Crematory of Blairsville
To order memorial trees or send flowers to the family in memory of Harold Dean Wimpey, please visit our flower store.