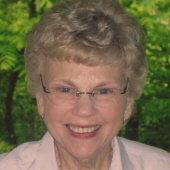 The Cochran Funeral Home of Blairsville announces funeral services for Mrs. Helen Owenby. Born Helen Wellborn, she went to be with the Lord on March 5, 2020 while in the care of Tranquility Hospice in Marietta Georgia. Mrs. Owenby was 93 years young. She was born in Shidler, OK to Frankie Rogers Wellborn and Olin F. Wellborn of Blairsville. After graduating from Union County High School, she briefly worked at the Blairsville Post Office before her father got her a job working in the soils department with the Blairsville County Agent. She then graduated from Draughon Business College in Knoxville, TN and fell in love with and married fellow Blairsville resident Max Owenby. The two moved to Atlanta where she worked and retired from Decatur Federal Savings and Loan while helping to support Max obtain a degree at Georgia Tech in Engineering. She and Mr. Owenby lived in the Smoke Rise area of Tucker for many years and were very active members at Grace United Methodist Church off Ponce de Leon in Atlanta. While in Atlanta Helen also enjoyed volunteering her time at the Fox Theater, the Garden Club, and the Atlanta Chamber of Commerce. After retiring Max and Helen moved back to Blairsville and became devoted members to their church Blairsville United Methodist and she volunteered at the Blairsville Chamber of Commerce, the Blairsville Historical Society She deeply appreciated her husband's love of roses and decided to take a course in gardening where she learned to care for a variety of plants. Despite having to overcome physical challenges she was an avid trail walker through Meeks park and her neighborhood everyday come rain or shine. Helen was very well known for her delicious pound cakes. She was always involved in the town festivals and would frequently make 10 or more cakes to sell or give away as gifts. In her later years she spent time with family teaching each one the secret to her amazing pound cakes. Unable to walk as she loved she became a fan of watching American Ninja Warrior and her game shows. She adored children and was devoted mother to her adopted daughter, nieces and nephews, grandchildren and great grandchildren. Towards the end of her life she lived with her great grandniece and her husband and two young sons in Hoschton, GA and would often say there is nothing better than listening to the sounds of children laughing and playing. Her lasting legacy will be life's lessons taught by example to family and friends.
Helen was preceded in death by her husband Max Owenby, parents Frankie and Olin , sister Sarah Carmon, brothers James Rogers and Olin Wellborn Jr., and leaves to carry on her generation of love of family to sister Eleanor Lee and brother-in-law Hugh Lee.

Funeral Services are scheduled for Monday, March 9, 2020 at 1:00 p.m. from the chapel of the Cochran Funeral Home of Blairsville with Rev. Don Landon officiating. The family will receive friends at the funeral home Monday from 11:00 a.m. until 1:00 p.m.

Helen will be laid to rest beside her husband, Max, in the Union Memory Gardens Cemetery.

Cochran Funeral Home of Blairsville in charge of arrangements.
To order memorial trees or send flowers to the family in memory of Helen Wellborn Owenby, please visit our flower store.