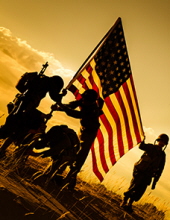 Herbert S. Gatch, 93, born in Sheldon SC, joined his wife of 64 years, Carolyn Gatch, in eternal glory with his Lord & Savior, on Sunday, December 27, 2020. He lived a full and God honoring life. After serving the country he loved with pride and patriotism alongside his brothers in the US Army during World War II, he found and married the love of his life. Together they built a legacy of faith and devotion with 4 children, 12 grandchildren, 23 great-grandchildren, and 26 great-great grandchildren. Herbert worked & retired as a foreman from Union Camp (International Paper) while residing in Savannah Georgia until retiring in the North Georgia mountains, that he and his wife Carolyn loved. While living in Savannah & raising their children, Herbert found a true and deep relationship with his Lord & Savior Jesus Christ at age 35. His relationship with Christ was evident to everyone who ever met him. He loved fishing, the mountains, working in his yard, rock hounding, telling jokes, and was extremely devoted to his wife, family, and to God. He loved being helpful and encouraging. He never missed an opportunity to share his faith with others. He was a faithful member of McConnell Baptist Church for over 32 years. Herbert is preceded in death by his loving wife Carolyn Gatch & his son Franklin Earl Gatch and grandson, Matthew Gatch. He is survived by his daughters, Brenda & son in law Pat Braswell, Linda & son in law Donald Coleman, & Carol Gatch, many grandchildren, great grandchildren, and great-great grandchildren. A small graveside service was held on Wednesday, December 30, 2020, interment was held at Osborne Cemetery.

Arrangements are entrusted to the Cochran Funeral Home of Hiawassee.
To order memorial trees or send flowers to the family in memory of Herbert Simmons Gatch, please visit our flower store.