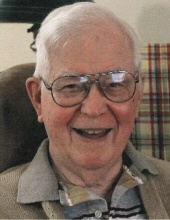 Hervey Strader Jones, age 95 of Blue Ridge, passed away August 17, 2020, in Blue Ridge. Mr. Jones was born June 13, 1925, in Clifton Forge, VA to the late John Irvine Jones and the late Martha Barbara Strader Jones. A member of the Presbyterian Faith, he was preceded in death by his brother, R Bane Jones. Mr. Jones graduated from Clifton Forge High School and enlisted in the Navy in 1943, serving in the South Pacific aboard the USS Lamar and participating in five invasions. Upon Returning to the USA he attended the University of Richmond from 1947 to 1952, graduating with a Bachelor of Science Degree in Personnel Management and later a Masters Degree in Business. On June 13, 1956, he married Geraldine Kantner at St. Giles Presbyterian Church and resided in Richmond, where they raised three children. He worked for the Small Business Administration as Loan Officer for thirty years and worked three Hurricane Disasters in 1965, 1969, and 1972. During their time in Richmond he served as Ordained Elder of the Giles Presbyterian Church, represented the church at the Metropolitan Area Resource Clearing House, served as Volunteer Emergency Foster Care, scorekeeper for little league sports, and worked as a bookkeeper and gardener. He moved to Blue Ridge in 1991 and became actively involved in the community including: Meals on Wheels, President of NARFE, Red Cross Disaster Relief Team, Habitat For Humanity, DFCS Citizen Review Panel, NCD Organizing Team for Faith Presbyterian Church, and the Fannin County Food Bank. He was known to be a man of his word; soft spoken; a true servant for his Heavenly Father. His time spent in daily study enabled him to live and walk in faith. He was a lifelong fan of the St. Louis Cardinals Baseball Team.

Arrangements entrusted to the Henry-Cochran Funeral Home of Blue Ridge, GA. You may send condolences to the family and sign the guest register at www.cochranfuneralhomes.com.
To order memorial trees or send flowers to the family in memory of Hervey S. Jones, please visit our flower store.