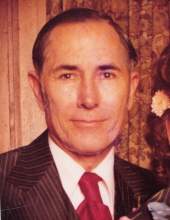 Cochran Funeral Home of Hiawassee announces the death and funeral services for Hiram Edward Kelly, who passed away on July 31st, 2021.

One of the quotes Hiram Kelly, also known as Buddy, often shared with others was: “The first thing I read when I open a newspaper is the obituaries.” Why? “To make sure my name isn’t in it.” On July 31, Buddy finally became the subject of his own obituary.

A simple man with an incredible sense of humor, he instantly became a friend to strangers. When Buddy first met someone, he would jokingly say, “I’m so old, when I was born, the Dead Sea was alive.” If that didn’t bring a smile, he would do his famous Jackie Gleason-style get away.

On June 5th, 1932, Buddy’s parents, Earl and Clytee Kelly, welcomed a second son in Hollandale, Mississippi. He was destined to be a humble, but determined young man. Under the hardest of circumstances, he and his family endured the depression in a humble dwelling that had neither an indoor toilet nor adequate running water. A few years later his sister Ann was born. At five-years-of age, Buddy and his brother Thomas took turns making a wood fire in their breezy clap-board house. The boys then milked the family cow in the early dawn before heading off to a one room schoolhouse. At the age of 17, Buddy defied the odds. Unlike many of his peers, Buddy finished high school. He then went on to join the Navy and serve in the Korean War.

Buddy later completed a program at the Embry-Riddle School of Aviation in Miami and became a certified aircraft mechanic. Soon afterwards he moved to Memphis after landing a job with Eastern Airlines. When visiting a local church on a Sunday morning, Buddy heard Nancy White give a testimony of her summer mission work with various Indian tribes in the Southwest. The following week the pastor informed the congregation that this young lady was seriously ill following surgery. Buddy showed up at the hospital bringing flowers and candy. After leaving, Nancy’s mother asked, “Who was that man?” Nancy just shrugged her shoulders. Buddy drove an eye-popping 1956 Corvette. After six weeks in the hospital, Nancy was released. The two were engaged a short while after. The knot held tight. This loving couple was a two-some for 56 years. Nancy and Hiram raised 12 foster children before she gave birth to their miracle son, Charlie, in 1980. They later adopted their last foster child, five-year-old Bobby.

Hiram leaves behind two sons, Charlie/Tori and Bobby/Shana as well as five grandchildren.

Funeral services will be held at 11:00 am on August 7th, at McConnell Baptist Church, with Danny Byers officiating. Special Music will be presented by Patsy Daniels and Chris Adams. Burial will be in the Osborn Cemetery with military honors presented by the North Georgia Honor Guard. Gentlemen selected to serve as pallbearers are: Allan Driskell, David Eliot, Micah Kelly, Noah Kelly, Alex Kelly, and Brian Underwood. Honorary Pallbearers include the Builders Sunday School Class. The family will receive friends on Saturday from 10 am until the service begins.

Engraved in Buddy’s wedding band is the word “ MIZPAH “ found in Genesis 31:49, meaning, “The Lord watch between me and thee when we are absent one from another.”