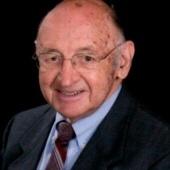 Mr. Homer Barrett, age 88, of Hiawassee, Georgia, passed away early Sunday morning, May 3rd, 2020 at the Chatuge Regional Nursing Home in Hiawassee. He was preceded in death by his wife, Laura Arispah Wilson Barrett in 2013; his parents, Avery Levi Barrett and Ola Shook Barrett; and brothers, Ernest and Everett Barrett.
Mr. Barrett was a native and long time resident of Hiawassee and a member of Union Hill United Methodist Church. He served his country during the Korean War era in the United States Navy. He had also been very active in the Towns County Lions Club where he served as the "Tail Twister" for several years. Mr. Barrett worked as a real estate agent for Glenda Parker Realty until his retirement. Homer was meticulous at whatever he did, from gardening, to sales presentations, to encouraging others to do their very best. He especially enjoyed gardening, and was so proficient at it, that he grew many prize vegetables.
Survivors include: son and daughter in law, David and Donna Barrett of Young Harris; son, Byron Sidney Barrett of Hiawassee; brothers and sisters, Essie (Jack) Ash of Hayesville, NC, Truman Barrett and Vaughn Barrett, both of Hiawassee and Roy Charles Barrett of Hayesville, NC; and 4 grandchildren, Laura Elizabeth Luker, Thomas Jeffrey Barrett, Matthew Barrett and Christopher Barrett; and 4 great grandchildren, William James Luker IV, Paul Barrett, Judah Barrett and Luke Barrett.
Graveside services will be held at 2:45 p.m. on Saturday, May 9th, 2020, at the Burch Cemetery, with North Georgia Honor Guard providing military honors. Rev. Katie Strals will officiate the service. Serving as pallbearers will be: Matthew Barrett, Sidney Barrett, Thomas Barrett, David Barrett, John Galloghy, and Jeff Walker.
Cochran Funeral Home of Hiawassee is honored to be serving the family of Mr. Homer Barrett of Hiawassee. We encourage you to visit our website at www.cochranfuneralhomes.com and send condolences and share your fond memories with the family of Mr. Barrett.
To order memorial trees or send flowers to the family in memory of Homer Barrett, please visit our flower store.