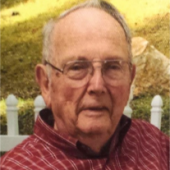 Howard was born in Stockbridge, Georgia on July 2, 1927 to the late Howard & Winnie (Wall) Fisher. He was the youngest of seven children. Following high school, he enlisted in the U.S. Navy, serving on the USS Stephen Potter and the USS DeHaven. After his military service, he worked in Atlanta for the Department of the Army in graves registration. He began a lifelong career with the Small Business Administration as a Senior Loan Officer, first in Atlanta and then in Miami in 1959, until his retirement in 1985. He attended First Presbyterian and met and married the love of his life, Virginia Vaughn. Over the years, they traveled extensively to Europe and throughout the United States.

He was known as a man you could count on through his selfless spirit as demonstrated in the way he cared for his family and loved his neighbors. From taking care of his home and property to lending a helping hand around his neighborhood in Miami, Howard was always available to attend to the needs of others. In his free time, Howard loved the ocean and being on the water. He enjoyed fishing and was an avid coin collector. Howard had a passion for cooking and creating unique dishes. He will be fondly remembered for his famous chili, beef jerky and grilling. Howard was a member of the American Legion, Lions Club, and Unicoy Masonic Church and as a deacon in the Presbyterian Church.

A memorial service will be held at a TIME TO BE DETERMINED LATER at Mountain Presbyterian Church in Blairsville with Reverend K. Travis Adams officiating. The time is still to be determined. Military Honors will be presented by the North Georgia Honor Guard.

Family would like to extend its heartfelt gratitude to the staff of Hayesville House for their care and compassion for the last 3 years.

In lieu of flowers, contributions may be sent to: Alzheimer's Association, Autism Speaks, Gift of Life Donor Program, or Mountain Presbyterian Church.

Arrangements entrusted to Cochran Funeral Home of Hiawassee.
To order memorial trees or send flowers to the family in memory of Howard Henry Fisher, please visit our flower store.