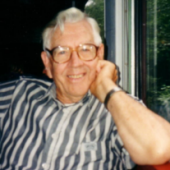 Born March 15, 1919 in the "Flat Lands" of Suches, Georgia "I.T." was the first of six children of James H. Harkins and Lola N. Abercrombie Harkins. Ira had four younger brothers, Eldo, twins Ralph and Harley, and Clyde. His baby sister, Stella Mae was his fifth sibling. Ira was preceded in death by his parents; brothers, Eldo Harkins, Ralph and Harley Harkins; and his wife, Pauline N. Jarrett Harkins. Ira is survived by his brother, Clyde Harkins of Suches, Georgia and Stella Mae Hayes of NC.

He was blessed with an extended family of nephews and nieces, too numerous to list but all of whom he appreciated and loved.

He met his future wife, Blairsville native Pauline Neel Jarrett (deceased 2013), at Young Harris College. They married in 1945 and he continued to be a devoted husband for 68 years.

A career military man, he served in the US Army for 31 years, 4 months, and 17 days, retiring in Fort Hood, Texas as Sergeant Major on April 1, 1973. Prior to America's entry into WW II, He was drafted November 12, 1941 from Baxter, GA. He ended up making it his career. His tour of duties included Panama Canal Zone, Ft Lewis Washington, Atlanta General Depot, Philippines, Ft. Benning, GA, Germany, Ft. Hood, Texas, Korea, Vietnam and other US posts.

He became a devout Christian in his early married life. From that moment on, throughout his adult life he lived his faith. Wherever he was stationed or settled he was active and supportive in a local church. He served as a deacon, a Sunday School teacher, and wherever the Church or community needed his services. His most recent church family whom he loved, was Zion Baptist Church in Suches.

His Army travels and retirement, never diminished or changed his longing to come back to the place of his birth and the experiences of his childhood...Union County and Suches, Georgia. Moving to Suches in 1980, Ira became involved in local activities. He was a board member of the Suches/Morganton Community Clinic, Suches Coordinator for Keep Georgia Beautiful, Blairsville Lions Club, North Georgia Honor Guard, Commander of the Blairsville VFW, and Life Time Member of Union County Historical Society. He was very active in helping to preserve the old Union County Court house and creating the book Heritage of Union County, Georgia, 1832-1994.

He was a passionate local historian, amateur archeologist, gardener, husband, father, grandfather and great grandfather. He loved God, his immediate and extended family, Union County, and anyone he met. He never met a stranger.

He was of the generation of Faith, Flag, and Family.

Funeral Services were held at 2:00 p.m. on Saturday, February 15, 2020 from the Chapel of Cochran Funeral Home. Interment followed at Corinth Baptist Church in Suches with Full Military Honors presented by the United States Army Honor Guard. Escort provided by the American Legion Riders Ira Weaver Post 121. The family received friends on Friday evening at the funeral home from 5-8 p.m.