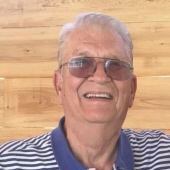 J.W. Porter, age 79, of Blue Ridge, passed away Sunday, July 19, 2020, at Northeast Georgia Medical Center in Gainesville. J.W. was born December 23, 1940, in Effingham, GA, to the late Joseph W. Porter, Sr. and the late Kathleen Dasher Porter. He grew up in Savannah, GA, where he married his high school sweetheart, Ruth Althen in 1961. He received an Electrical Engineering degree from Georgia Tech in 1964. Afterward, J.W. returned to Savannah to work for the Savannah Electric and Power Co. After 12 years he joined a consulting firm in Atlanta. He worked with Patterson and Dewar Engineers for 25 years retiring at the end of December 2003. After retirement, he and Ruth moved to Blue Ridge, Ga.
J.W. became an excellent woodworker, producing many beautiful items with his woodturning lathe. He remained an avid Georgia Tech football and basketball fan, attending all games possible. He was an accomplished poker player, enjoyed boating on the lake, and spending time with his family and friends. For many years he enjoyed attending a monthly breakfast with retired friends from Tri-State Electric corp. J.W. was an Eagle Scout and a member of the Order of the Arrow. He was an active member of the Shepherd of the Hills Lutheran Church, where he was the liaison with a Blue Ridge Boy Scout troop as well as chairman of the property committee.
In addition to his parents, he was preceded in death by his best dog Scarlett. Survivors include his wife, Ruth A. Porter, daughter, Valarie P. Telenick (son-in-law Robert A. Telenick) son, Bart W. Porter (daughter-in-law Sandra Craft Porter). Also surviving are grandchildren, Steven W. Porter, Abigail D. Porter, and Zoe F. Telenick. brother, Larry M. Porter (sister -in law Betty). brother-in-laws George B. Althen (sister-in Judi) and sisters-in-law, Faith M. Hendrix, Judy I. Bailey, and Grace E. Neal.
There are multiple nieces, nephews, and cousins that will also miss him deeply.
A memorial service will be held at a later date when travel becomes safe. Remembrances may be sent to Shepherd of the Hills Lutheran Church/Men's Group. 823 Forge Mill Road, Morganton, GA 30560. Arrangements entrusted to the Henry-Cochran Funeral Home of Blue Ridge, GA. You may send condolences to the family and sign the guest register at www.cochranfuneralhomes.com
To order memorial trees or send flowers to the family in memory of J. W. Porter, please visit our flower store.