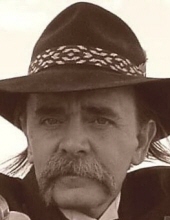 Jim was born on June 1, 1945 in Ohio to Andrew and Helen Paulis. Jim fathered two children, his son Jonathan, and his daughter Heather. At the time of his death, Jim was married to Kathy Paulis, with whom he shared a home in Blairsville, Georgia.

Jim was a musician, singer, painter, potter, jewelry maker, rock hound, Wild West enthusiast, actor, and photographer. Jim loved to fish and loved to watch birds and other wildlife. Jim loved to cook, make jerky, and was creative in the kitchen. Jim was known for telling stories, many of which might have been tweaked a bit for dramatic flair; but that was Jim, and that was one of his best qualities.

Jim served in the Army during the Vietnam War. Prior to being diagnosed with a brain tumor, Jim worked with the United States Department of Veterans Affairs to speak with other veterans, including many that recently returned from service overseas. Jim was proud of his service to his country.

Jim was preceded in death by his father, Andrew, and his mother, Helen. He is survived by his wife, Kathy, his two children, Jonathan and Heather, his grandson, Emerson, his brother, Mick, his nephew Jimmy, and his niece MaryRose.

A funeral service will be held on Thursday, September 10, 2020 at the Georgia National Cemetery in Canton, Georgia at 9 A.M. In lieu of flowers or other tributes, the family requests that donations be made to the Brain and Behavior Research Foundation in honor of and in memory of Jim.
To order memorial trees or send flowers to the family in memory of James Paulis, please visit our flower store.