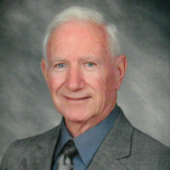 James Powell Lamb, Sr, 83, died November 26, 2019 on his sons' shared birthday at Chatuge Regional Nursing Home in Hiawassee, Ga. Born on October 3, 1936 to the late Chris C. Lamb, Jr and Katie Thomas Lamb in Wingate, NC, Jim married his childhood sweetheart, Eleanor Henry in 1954 and they had four children, James Jr, Anne, Susan and John. Jim retired from Pratt & Whitney Aircraft with 33 years of service in 1993. He moved to Hiawassee in 1995 and served as Interim Minister of Music and a member of the McConnell Baptist Church Men's Quartet and Towns County Santa. Jim loved Christmas, golf, guitars, magic and music.

The family gathered on October 4th of this year to celebrate Jim's life for his 83rd birthday. His body was donated to the Augusta University Medical College of Georgia and no funeral service will occur.

Jim was proceeded in death by his parents, his brother, Ronald, as well as his sons, John and James.