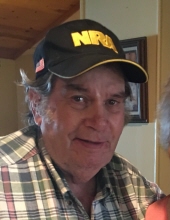 The Cochran Funeral Home of Hiawassee announces Graveside Services for Mr. James Terrell Garrett, age 90, of Hiawassee, who passed away on Sunday, November 29, 2020 at his home.

Mr. Garrett was a native of Hiawassee, and a veteran of the U.S. Air Force and served during the Korean War. He had been a manager at AT & T. Mr. Garrett was a member of Lower Hightower Baptist Church.

Graveside services have been scheduled for Saturday, December 5th, 2020, at 2:00 p.m., to be held at Lower Hightower Baptist Church Cemetery.

Arrangements have been entrusted to the care of Cochran Funeral Home of Hiawassee. Please share your condolences with the family and sign the guest registry online at www.cochranfuneralhomes.com.
To order memorial trees or send flowers to the family in memory of James Terrell Garrett, please visit our flower store.