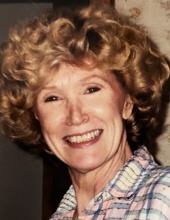 JoAnne Simonds of Murphy, passed away Sunday, January 17, 2021, at her home. Ms. Simonds was born in Murphy, NC, to the late James Clarence Simonds and the late Vera Mundy Simonds. Joanne worked for over 50 years in banking. She started with Ducktown Bank, which later became The Home Bank, and eventually retired as Vice President of BB&T Bank. She attended Hopewell Baptist Church, enjoyed playing the guitar, singing, traveling, and also loved animals and would often rescue animals in need. Joanne was preceded in death by her father, James Clarence Simonds and mother, Vera Mundy Elrod.

Arrangements entrusted to the Finch-Cochran Funeral Home of McCaysville, GA. You may send condolences to the family and sign the guest register at www.cochranfuneralhomes.com.
To order memorial trees or send flowers to the family in memory of JoAnne Simonds, please visit our flower store.