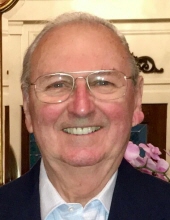 The Cochran Funeral Home of Hiawassee announces Funeral Services for Johann Forberger, age 87,  went home to be with Jesus on January 01, 2022. He passed away peacefully at his home in Hiawassee, Georgia after a long battle with Alzheimer’s and dementia.

Johann Forberger was a hard-working family man.  He enjoyed working creatively with his hands, and he relaxed by watching some wrestling on TV or puttering around in his workshop tinkering with one of his own inventions to make life easier-microwave button pusher or trash-tamper anyone?  Papa never failed to put his carpentry and cabinet-making training to good use.  Johann was born in Eisdorf, Czechoslovakia in 1934. He and his brother, Matthias, and later his parents, Johann and Julianne Forberger, left their homeland due to World War II.  They lived in West Germany for a few years before emigrating to the United States in 1958. They eventually settled in Danbury, Connecticut, where Johann met the woman who would become his wife, Edda Emmi Wrede, at the Arion Singing Society-a German club. She was visiting from Brazil when she met Johann. They married shortly thereafter, and were happily married for 57 years.

Johann will be lovingly remembered for his quick smile and ready wit. He and Edda had three children, daughters Marlena Forberger-Spence and Irene “Ren” Bessette, son and daughter-in-law Paul and Rachel Forberger. He was blessed with 8 grandchildren: Serena, Claudia, and Camryn Spence; Nicole and Nicholas Bessette (married to wife Kate); and Victoria, Corina, and Paul Forberger Junior.

Funeral Services will be held at 2 p.m. on Saturday, January 8, 2022 from the Chapel of Cochran Funeral Home with Pastor Dave Wesche officiating. Interment will follow at Laurel Hills Memory Gardens. The following gentlemen have been selected to serve as pallbearers: Paul Forberger, Paul Forberger, Jr., Nicholas Bessette, Rudy Escobar, Alberto Gomez, and Albino Vasquez. The family will receive friends on Saturday from 1 pm until the service begins.

To order memorial trees or send flowers to the family in memory of Johann Forberger, please visit our flower store.