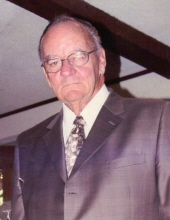 John Kiernan married his childhood sweetheart and love of his life, Mary Lou and they recently celebrated their 66th wedding anniversary. Whenever people complimented him, he always said that he couldn’t have done it without the love and support of his Mary.

It has been said of John by many people that there’s the right way, the wrong way and then there’s John’s way. He was a force to be reckoned with; when he set his mind to something, he made it happened. He quietly helped many, many people throughout his lifetime. Anyone that ever dealt with him knew they could trust him and his word. He and his wife live in the community they created and developed; Lakeside Village.

He left a trail of accomplishments, but his greatest pride and joy was his family. He was going to tell you about his wonderful wife, kids, grandkids and great-grandkids, whether you wanted to hear it or not. He deeply loved his family.

Arrangements entrusted to the care of Cochran Funeral Home & Crematory of Blairsville.
To order memorial trees or send flowers to the family in memory of John C. Kiernan, please visit our flower store.