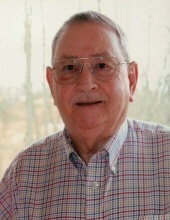 The Cochran Funeral Home of Blairsville announces services for Mr. John Wayne England, age 77, of Blairsville who passed away peacefully at his home on Saturday November 21, 2020, following a brief period of declining health.

Mr. England was born in Waynesville, North Carolina on August 6, 1943 to the late Jimmy and Mae England. He was raised in and a lifelong resident of Union County, Georgia. Mr. England was a loyal member of Old Liberty Baptist Church. For 27 years until his retirement, he and several local men, would carpool to work for General Motors in Doraville where he worked as an inspector. Mr. England was a man who enjoyed talking with people and working in his yard- which he kept in immaculate condition. He also loved listening to gospel music and reading his Bible. Mr. England was a family man and adored his children and grandchildren.

Mr. England will be missed by all who knew him, but especially by his family: his loving wife of 57 years, Pauline Barrett England; son & daughter-in-law, Brent & Karen England; daughter & son-in-law, Rhonda & Todd Collins; and grandchildren, Cameron Collins, Caylee Collins, Amelia Dyer, and Ava Dyer. He was preceded in death by his parents, Jimmy & Mae England; and his brothers, Doug England and Larry England.

Funeral Services are scheduled for Tuesday November 24th at 2:00 p.m. from the chapel of the Cochran Funeral Home of Blairsville with Rev. Brandon Hester and Rev. Mark Alexander officiating. Special music will be presented by Debra Collins. Interment will follow in the Old Liberty Baptist Church Cemetery, with the following gentlemen serving as pallbearers: Cameron Collins, Bill England, Randy Barrett, Troy Collins, Shawn Mashburn, and Eddie Alexander. The following gentlemen are requested to serve as honorary escort to the family: Calvin Dyer and John Seabolt. The family will receive friends at the funeral home on Monday evening from 5 until 8 p.m.

Flowers will be gratefully accepted; however, if you wish to do so, memorial contributions may be made in Mr. England's memory to Old Liberty Baptist Church Cemetery Fund.

Arrangements have been entrusted to the care of Cochran Funeral Home of Blairsville. Please share your condolences and sign the online guest registry at www.cochranfuneralhomes.com.
To order memorial trees or send flowers to the family in memory of John England, please visit our flower store.