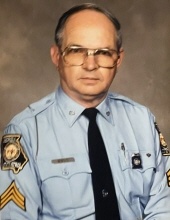 The Cochran Funeral Home and Crematory of Blairsville announces Funeral Services for Mr. Johnny Carroll Moss, age 88 of Suches who passed away on Wednesday evening, November 24, 2021 at his home.

Mr. Moss has lived in Suches, Georgia along side his wife, Urania Phillips Moss since 1972. He was a Georgia State Trooper and also a United States Navy Veteran.

He will be warmly remembered by all who knew him, but especially missed by his family: his loving wife, Urania Phillips Moss; his children, Donald Carroll Moss (Deanna), Stewart Nathan Moss, and Susan Moss White (Tommy); and his brother, Danny Moss (Charlotte). Also, sharing in his legacy are grandchildren, Caitlin Hollenbeck (Cosbie), Hannah White, Haley White Sosebee (Cole), Chase Moss (Shelby), and Declan Moss; and 4 great grandchildren. Mr. Moss is preceded in death by his son, Richard Gregory Moss; his parents, Carroll & Ella Moss; and his brother, Truett Moss.

Funeral Services will be held at 2:00 p.m. on Saturday, November 27, 2021 at Mt. Lebanon Baptist Church with Rev. Matthew Jones officiating. The body will lie in-state from 1:30 p.m. until the service begins. Special music will be presented by Charlotte Moss and the Mt. Lebanon Church Choir. Burial will be in Mt. Lebanon Baptist Church Cemetery. The family will receive friends at Cochran Funeral Home of Blairsville on Friday evening from 4 p.m. until 7 p.m..

In lieu of flowers, memorial donations may be made to the Mt. Lebanon Baptist Church Cemetery Fund.

Arrangements entrusted to Cochran Funeral Home & Crematory of Blairsville.
To order memorial trees or send flowers to the family in memory of Johnny Carroll Moss, please visit our flower store.