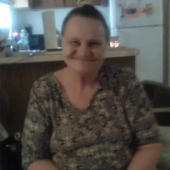 It is with overwhelming grief and heartache that we announce that "mama," Jottie Ann (Queen) Pratt, age 62, Murphy, NC, received her wings and went home to be with the lord on Wednesday, July 1, 2020. She was born on November 3, 1956, in Robbinsville, NC, to the late Vince David Queen and the late Mattie Sue Crisp. Mrs. Jottie was a loving mother, an avid reader, and she loved the fall season. She is preceded in death by her parents, Vince David Queen and Mattie Sue Crisp, and, sister, Jessie May Prescot.

The family has requested a private memorial service.

Arrangements entrusted to the Henry-Cochran Funeral Home of Murphy, NC. You can send condolences to the family and sign the guest register at www.cochranfuneralhomes.com.
To order memorial trees or send flowers to the family in memory of Jottie Ann Pratt, please visit our flower store.