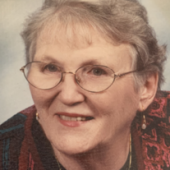 Cochran Funeral Home and Crematory of Blairsville announces the death and funeral services for Mrs. Juanita Marie Prentice, age 89, who passed away on Friday, February 21st, 2020 at her residence in Blairsville.

Mrs. Prentice was born in Indianapolis, Indiana, a daughter of the late Carl White and the late Jennie Crosley White. She had been living in Blairsville since 1992, moving here from Port St. Lucie, Florida. She was a member of First United Methodist Church of Union County, and the Union General Hospital Auxiliary. She was lovingly known as "Grams" by her family. Her husband, Robert E. Prentice, passed away in 1999.

Funeral services for Mrs. Prentice have been scheduled for Friday, February 28th, 2020, to be held at 2:00 p.m., in the Chapel of Cochran Funeral Home in Blairsville. The following gentlemen will serve as pallbearers: Robby Roxbury, Drew Prentice, Nathaniel Prentice, Andrew Jones, Harold Maybe, and William Prentice. Burial will be in Union Memory Gardens Cemetery.

Visitation will be held on Thursday, February 27th, between the hours of 6 until 9 p.m.

Flowers are being accepted; however, if you wish to make memorial contributions, they can be directed to The Alzheimer's Foundation.

Cochran Funeral Home and Crematory of Blairsville is honored to be serving the family of Mrs. Juanita Prentice. Please share your condolences and memories on our website, www.cochranfuneralhomes.com.
To order memorial trees or send flowers to the family in memory of Juanita Marie Prentice, please visit our flower store.