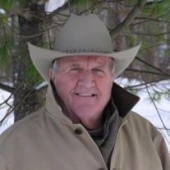 Mr. Kermit Vaughan Wiles, age 78 of Morganton, passed away Saturday, January 17, 2015 at the Wellstar Cobb General Hospital. Mr. Wiles was born June 24, 1936 in Arista, WV to the late Ardle Wiles and the late Myrtle Sizemore Wiles. He was preceded in death by one brother, James Ardle Wiles, and a sister, Sandra Wiles White. Kermit served in the United States Army during the Korean conflict earning medals for Good Conduct and Sharpshooter. He graduated from The Georgia Institute of Technology with a Bachelor of Industrial Engineering and received a Master of Business Administration from Georgia State University. He worked for many years in Atlanta in the banking field with latter jobs being in the Government Banking Division and retired in 2001 from The State Department of Juvenile Justice where he served as Business Manager of Engineering and Construction Services. He was an avid fly fisherman, loved 4 wheeling trips with family members, and enjoyed wood carving. Prior to his illness, he was an active member of Bethel United Methodist Church in Morganton and enjoyed serving for several years on the finance committee.

Survivors include loving wife, Nanon Goodman Wiles of Morganton, two daughters, Courtney Wiles DuBois and husband Rod, and Karen Wiles Murray, one grandson of whom he was especially proud, Joshua Murray, and Josh's special friend, Kristi Fowler, all living in the Atlanta area, one sister, Judy Thompson, from Bluefield, WV, one brother, Phillip Wiles and wife, Kay, from Lawrenceville, and many nieces and nephews. He is also survived by his loving faithful canine companions, Lucky and Addie.

A memorial service will be held to celebrate Kermit's life on Saturday, January 31 at 11:00 am with visitation for one hour prior to the service at the Henry Cochran Funeral Home in Blue Ridge, Georgia. Military honors conducted by the North Georgia Honor Guard. Flowers are appreciated, but if you prefer, please make donations to your favorite animal rescue organization or Whipporwill Horse Rescue, 130 Padgett Lane, Turtletown, TN 37391.

Arrangements entrusted to the Henry-Cochran Funeral Home of Blue Ridge, Ga. You may send condolences to the family and sign the guest register at www.cochranfuneralhomes.com.
To order memorial trees or send flowers to the family in memory of Kermit Vaughan Wiles, please visit our flower store.