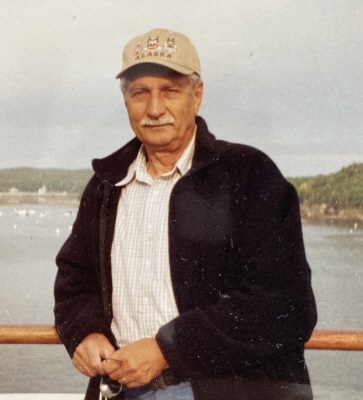 It is with great sadness the family of Kim Mark Fene announces his passing
on January 6, 2021 at the age of 86. Kim passed away peacefully of old
age near his home in Blue Ridge, Georgia. He did not have Covid. The
family is grateful for all the healthcare workers at Blue Ridge Memory Care
who worked around the clock to keep him safe from the virus and
comfortable in his final days. He is survived by his loving wife Anne of 40
years and three of his four children Sandra Fene’ Wolfson (husband Greg),
Forest ‘Mark’ Fene’, and Deanna Fene’ Holland (husband
Greg). He is also survived by 5 grandchildren Alistair, Madeline, Lauren,
Chester and Wil; and his wife Anne’s four children, Stephen (wife Sally)
Hope, Greg and Ron Lusignan who have taken care of Kim and loved him
like their own father. Kim was preceded in death by his daughter Laureen
Marie Fene’ (1989), his brother Richard ‘Dick’ Fene (2019) and his parents
Wilamina Planthaber Fene (1991) and William J. Fene (1963).
Kim was born in Pittsburgh, Pennsylvania in 1934. As a young kid he grew
up on Mount Washington overlooking the city. When his father, a geologist,
was appointed the Assistant Director of the U.S. Bureau of Mines, his
family moved to the Washington, DC area. Kim attended middle school and
high school in nearby Silver Spring, Maryland.
After graduating from high school he joined the Army and was stationed for
a brief time in Germany. When he returned, he got a summer job at
Yellowstone National Park and that’s when this city boy fell in love with
nature and The National Parks.
He attended college at Utah State in Logan where he received his degree
in Wildlife Management and Forestry. His first full time job was at
Theodore Roosevelt National Park in North Dakota. During his 30 plus
year career with the National Parks Kim worked at Blue Ridge Parkway in
North Carolina and the Grand Canyon in Arizona. Through the years he
moved up through the ranks and was Chief Ranger at Mesa Verde National
Park in Colorado and at Chattahoochee River National Recreation near
Atlanta.
Kim spent his life tirelessly protecting our natural resources for future
generations and was a passionate advocate for the environment.
After his retirement Kim and Anne enjoyed traveling around the country in
their camper trailer and going on cruises. Kim loved to fish, go on long
walks and work in his large garden.
Due to Covid the family is not able to travel and hold a proper funeral and
ceremony at this time. The family hopes to gather in the near future and
spread his ashes on a mountain peak or along a stream in one of his most
beloved National Parks. Kim must have felt as John Muir, the Father of the
National Parks did when he famously said, “The mountains are calling and I
must go.” …
Charitable donations in memory of Kim can made to the National Park
Foundation.
To order memorial trees or send flowers to the family in memory of Kim Mark Fene, please visit our flower store.