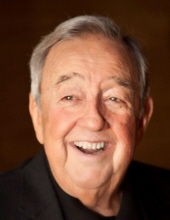 Larry Hayes, of Ormond Beach, Florida, and McCaysville, Georgia, died December 30, 2020, at his mountain home on Fightingtown Creek in McCaysville. He was 81.
Born in Atlanta on October 4, 1939, he was the son of Luther Floyd and Ruby Thomas Hayes, both of Fannin County, Georgia. His father was a steamfitter who traveled extensively to work on construction projects around the country, so Larry grew up in multiple cities, including Atlanta; Claremore, Oklahoma; La Porte, Texas; Oak Ridge, Tennessee; Aiken, South Carolina; and Ocala and Gainesville, Florida.
He attended Gainesville High School, graduating in 1957. There, he met his high school sweetheart, Rebecca Thomason, who became his wife in 1959. They attended the University of Florida together, and Larry graduated in 1962 with a BS in Pharmacy. The couple had two children – a daughter, Laura, in 1959, and a son, Bruce, in 1963.
Larry began his career as a registered pharmacist for Liggett Rexall in Sarasota, Florida, but soon moved on to a pharmaceutical sales position with Eli Lilly and Company, where he worked for 12 years. He began as a sales representative in Clearwater, Florida, and was promoted in 1969 to a Government Sales position that took him and his family to San Antonio, Texas.
Although his original career was in pharmacy and pharmaceutical sales, Larry’s lifelong dream was to become an attorney so, in 1975, with his wife’s support, he took the LSAT and was admitted to the St. Mary’s University School of Law in San Antonio. There, he was a member and staff writer of the Law Journal. He was also a member of the school’s national team competing in moot court and mock trial competitions at the school and against other schools nationally. Upon graduating with a JD in 1977, he received the prestigious Order of the Barrister Award, an honor society for US law school graduates and practicing lawyers who demonstrate exceptional skill in trial advocacy, oral advocacy and brief writing.
His first job after law school was with the Law Offices of Windle Turley in Dallas. Later, he worked for 19 years for Cantey Hanger LLP in Fort Worth, becoming a partner and a member of the firm’s management committee. Using his background in pharmacy, he specialized in medical malpractice defense and enjoyed arguing cases in front of juries. He appeared before the Supreme Court of Texas and the US Court of Appeals for the 5th Circuit and was named a Super Lawyer of Texas by Texas Monthly magazine. He retired in 2005.
While living in San Antonio, the Hayes children took up competitive swimming. Both had a talent for it, which led to years of early morning carpools and weekend swim meets for Larry and Rebecca. Laura was a state champion in the butterfly while Bruce focused on freestyle and individual medley events. Bruce went on to earn a full scholarship to UCLA and won multiple national and international titles, culminating in a gold medal as the anchor of the US men’s 4 x 200 meter freestyle relay team at the 1984 Olympic Games in Los Angeles.
Bruce is currently Managing Director of Health at Edelman, a publicrelations agency, in New York City. Laura is a bilingual elementary school teacher with the Lewisville Independent School District in Texas.
While he pursued his law degree, Larry’s wife supported the family financially. In return, he took up the cooking chores for the family and, in the process, discovered he had a talent for it. He became a frugal grocery shopper, creative menu planner, and, eventually, a gourmet cook. He took several cooking classes but was mostly self-taught, avidly watching Jacques Pepin on PBS as well as many programs on the Food Network.
When he retired in 2005, Larry and Rebecca moved to Ormond Beach, Florida. They enjoyed traveling and spending time with their family and friends. Larry also continued his multiple passions -- cooking, Civil War history, genealogy, and golf, among others. In 2014, the couple purchased a mountain home in Fannin County, Georgia, where Larry’s ancestors have lived since the 1830s and where his family continues to gather for vacations and holiday celebrations.
Larry was preceded in death by his sister Barbara Hayes Carpenter. In addition to his wife of 61 years, he is survived by his children Laura Brewer (Michael) and Bruce Hayes (Gene Hendricks), two grandchildren, Lindsay Brewer and Christian Brewer, great-grandson, Kyrie Hayes Jones, and sister-in-law Patricia Nininger.
Donations can be made to the Larry B. Hayes Memorial Fund at the Blue Ridge Mountain Arts Association, Blue Ridge, Georgia (https://www.blueridgearts.net/donations--scholarships.html).
To order memorial trees or send flowers to the family in memory of Larry Hayes, please visit our flower store.