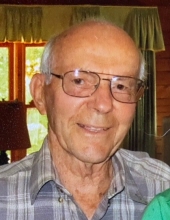 Leon Cripe, age 97, of Blue Ridge, passed away Thursday, September 2, 2021, at his home. Mr. Cripe was born April 2, 1924, in North Manchester, IN, to the late Ora Cripe and the late Eva Heeter Cripe. He was a member of Blue Ridge First Baptist Church and the Blue Ridge Gideon Camp. Leon was a veteran of the US Army Air Corp, then the US Air Force as a pilot in World War II and the Korean Conflict, and later, the Michigan Air National Guard and the Air Force Reserve. He was a former airline pilot who retired from Republic Airways. Leon was preceded in death by his son, Nicholas Cripe.

Leon accepted Christ as his savior when he was 32 years old. He began studying the Bible almost immediately and loved to share what his Savior meant to him, including that, "It has been a joy and great blessing to serve the Lord."

Arrangements are entrusted to the Henry-Cochran Funeral Home of Blue Ridge, GA. You may send condolences to the family and sign the guest register at www.cochranfuneralhomes.com.
To order memorial trees or send flowers to the family in memory of Leon Cripe, please visit our flower store.