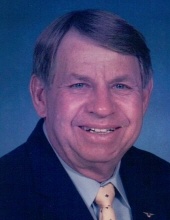 Mr. Luke Stewart, age 77, of Morganton, Georgia, passed away unexpectedly on Monday, September 6th, 2021 while doing what he loved to do- serving others!

Luke was born in Oxford, Georgia, a son of the late Luther Stewart, Sr., and the late Fannie Mae Harper. He was a veteran of the U.S. Air Force stationed in Key West, Florida during the Cuban Missile Crisis. Afterward, Luke and Sue made their home in Fayetteville, Georgia where he established a 30 year career with Delta Airlines as an aircraft mechanic and inspector. After retirement in 2000, Luke and Sue moved to the mountains. He was a collector of many things including antique Model A Fords and tractors. Luke and Sue accepted Christ in 1976 and lived a life from that point forward of serving the Lord and His people. He was truly gifted with a servants heart. He was a member of Temple Baptist Church and prior to that Blairsville First Baptist Church where he was very involved with their mission team. Luke enjoyed conversation and never met a stranger. He was an avid newspaper reader and Fox News amateur analyst.

He will be warmly remembered by all who knew him, but especially missed by his family: his loving wife of 55 years, Sue; son and daughter-in-law, Jason and Stephanie Stewart; daughter and son-in-law, Julie and Steve Thompson. Also, sharing in Luke's legacy are grandchildren: Evan Luke Stewart and Ashlan Marie Stewart.

Funeral services will be held at 2:00 p.m. on Thursday, September 9th, 2021 at Temple Baptist Church in Morganton with Pastor Roger Beck and Rev. Dick Stillwell officiating. The family will receive friends at the church beginning at 12 noon until time for the service to begin. Interment will be at New Hope Baptist Church Cemetery with Military Honors presented by the North Georgia Honor Guard.


Arrangements have been entrusted to the care of Cochran Funeral Home of Blairsville. Please sign the online guest registry and leave your condolences for the family online at www.cochranfuneralhomes.com.
To order memorial trees or send flowers to the family in memory of Luke Stewart, please visit our flower store.