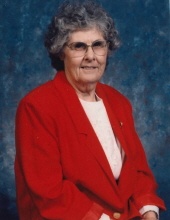 The Cochran Funeral Home and Crematory of Blairsville announces Graveside Services for Mrs. Mabel Sarah Watkins Rich who passed away peacefully at the Union General Nursing Home on Wednesday, November 11, 2020, at the age of 96 after a period of declining health. Mrs. Rich was born on October 6, 1924 in Blairsville to the late Virgil and Julia Stephens Watkins and was a lifelong resident of Union County. She married LA Rich in 1946 and celebrated 46 years of marriage until LA’s passing in 1992.

Mrs. Rich retired as a lunchroom cook from the Union County Junior High after many years of making thousands of biscuits and yeast rolls - thousands of elementary, middle and high school students loved her biscuits and rolls and always requested seconds. She was an active member of Zebulon Baptist Church for many years where she taught Sunday School and sang in the choir. She enjoyed singing about her Lord and attended many gospel singings.

In addition to her parents, Mrs. Rich was preceded in death by her husband, LA Rich; her son, Mike Rich; two brothers, Raymond Watkins and Tommy Watkins; and a sister, Pauline Watkins Conley. She is survived by several nieces and nephews, including special great-nephews Jason (Tarah) Burrell and David Burrell; daughter-in-law, Teresa Kelley; and special friend, Jane Wimpey Rogers.

A graveside service is scheduled for Monday, November 16 at 11 a.m. at Union Memory Gardens Cemetery where she will be laid to rest beside her husband and son. Officiating will be Rev. Brent Chatham and Rev. Jerry Helton.

Arrangements entrusted to Cochran Funeral Home & Crematory of Blairsville.
To order memorial trees or send flowers to the family in memory of Mabel Watkins Rich, please visit our flower store.