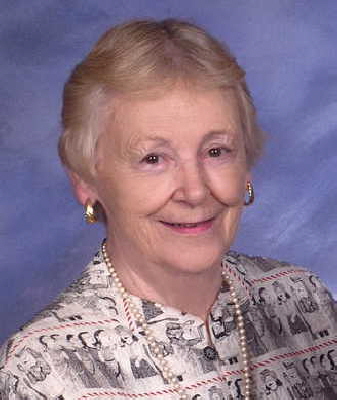 Mardee was born in Chicago, IL, on October 22, 1925, the youngest of 4 children born to Charles and Blanche.

During World War II, Mardee was a US Cadet Nurse Corps member as a nursing student, graduating with her RN from Loyola University in Chicago. Mardee and her best friend, Ruth, went on a graduation celebration trip to a dude ranch in Colorado. There she met the love of her life, Dan Kauffman. They had over 69 years of wedded bliss. They were truly each other’s soul mate.

Mardee raised 5 children with Dan, giving up work outside the home till her youngest could go to pre-school. She then obtained certificates for catering and different types of cooking at Atlanta Area Tech.

Mardee ran a restaurant in the Atlanta area before the family moved North for a few years. Mardee operated a catering and events business at the Auburn-Cord-Duesenberg Museum in Auburn, IN, and later ran a restaurant and catered weddings in the St. Charles, IL area.

Finding their way back South in 1985, Mardee and Dan operated the Sears Catalog Store in McCaysville for 7 years, and then opened the White House Bed and Breakfast in Ducktown, TN. They ran the B+B for 20 years.

Mardee loved to give back to her community, never tiring of promoting tourism. She was involved in numerous tourism initiatives with the Fannin Chamber, TriCities Business Association and others. In 2012 Mardee was granted an Honorary Lifetime Membership to the Fannin County Chamber of Commerce, “in recognition of outstanding contributions to Fannin County.”  She and Dan also volunteered at the 1996 Olympics and then the Ocoee Whitewater Center for almost 20 years.

In lieu of flowers, the family asks that Mardee be remembered through a donation to your favorite charity in her honor.

Funeral arrangements are being handled by the Henry-Cochran Funeral Home in Blue Ridge, GA. There will be a visitation with family from 1:00-3:00 and a service at the funeral home starting at 3:00 p.m. on Thursday, the 10th of February.

You may send condolences to the family and sign the guest register at www.cochranfuneralhomes.com.

To order memorial trees or send flowers to the family in memory of Margaret Ann Kauffman, please visit our flower store.