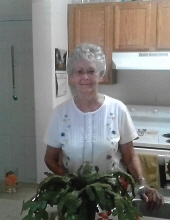 Mrs. Vaughn was born on April 19th, 1931 in Watseka, Ill. to the late Velma and Raymond Pepmiller.
In her spare time, Marilyn loved playing Bingo and square dancing. She is preceded in death by her husband,
Lewis Earl (Dutch) Vaughn, Jr. Marilyn and Lewis moved to Florida in 1961 and she resided there until April 2018 when she moved to Hiawassee, Ga.

Arrangements are entrusted to the Cochran Funeral Home of Hiawassee.
To order memorial trees or send flowers to the family in memory of Marilyn Kay Vaughn, please visit our flower store.