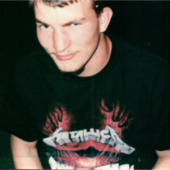 Cochran Funeral Home and Crematory of Blairsville announces Memorial Services for Marlon Gerald Gibson, age 40, of Blairsville who passed away on Friday October 18, 2019.

"Waldo" (Marlon) loved his children and had a heart for animals. He spent a lot of his time with both. Known to be a hard worker and loyal man, Waldo was a friend to all he crossed paths with. He enjoyed the solitude of music- listening loud and often! Waldo connected song lyrics to the phases of his life. He would interpret each and every word with the emotions that he felt.

He loved California and spoke for many years of making a life out there "one day". He finally made that happen.

A Memorial Service will be held at 11:00 a.m. on Tuesday, October 22, 2019 at Cochran Funeral Home of Blairsville. The family will gather with friends from 10 a.m. until the service begins.

The family requests that memorial donations be made to Cochran Funeral Home, P.O. Box 338, Blairsville, GA 30514 to help defray funeral expenses.
To order memorial trees or send flowers to the family in memory of Marlon "Waldo" Gerald Gibson, please visit our flower store.