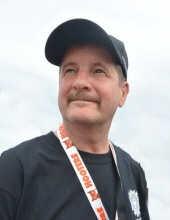 The Cochran Funeral Home of Hiawassee announces Memorial Services for Martin "Marty" Andrew Mynatt, age 58 of Hiawassee who passed away on October 12, 2021.

Martin Andrew Mynatt, born May 3, 1963 in Sarasota, Fl. He went by many names, Marty, Pop in Georgia, Hun, Martini, Mortimor, Martin None Mynatt but the one he was most proud of was Dad.

He enlisted in the US Navy in 1981 and honorably served overseas on multiple ship deployments in support of action in Beruit and Grenada. He was very proud of being a Tin Can Sailor and cherished the lifelong friendships he made while Serving.

After his service in the Navy, he and his growing family returned to his hometown of Sarasota, Fl where he founded and grew a successful Tile business. In 2005 Marty relocated to Hiawassee, GA where he reestablished himself as a Master Tradesman.

Marty created a lasting legacy in Hiawassee through his heavy involvement with the Veterans of Foreign War and the American Legion. He served as the Canteen Manager, was a member of the House Committee, member of the Building Committee, charter member of the Legion Riders and a two time Post Commander.

Marty will be warmly remembered by all who knew him, but especially missed by his family: loving wife, Loretta Mynatt; mother, Beverly Mynatt; his children, Kyle Mynatt, Kristi & Steve Quarles, Cody Harkins & Brittany Ledford, Chris & Nicole Lewis, and Matthew Lewis. Also, sharing in his legacy are his 5 badass grandchildren, Cast Mynatt, Jonah Quarles, Wyatt Pemberton, Cooper Lewis, and Olivia Lewis; and many siblings, sisters-in-law, nieces and nephews. He was preceded in death by his son, Kodi Mynatt; his father, Douglas Mynatt; and brothers, Jamie Mynatt and Pat Mynatt.

A Memorial Service will be held at 4:00 p.m. on Sunday, October 17, 2021 at the Veterans of Foreign Wars Post, 1329 Sunnyside Rd., Hiawassee, GA 30546. The service will be officiated by the Officers of VFW Post 7807 and special remembrances will be shared by those in attendance. Military Honors will be presented by the North Georgia Honor Guard.

In lieu of flowers, Memorial Donations are preferred to be sent to VFW Post 7807, Attn: Dan Heeley, P.O. Box 927, Hiawassee, GA 30546 for their new building fund.
To order memorial trees or send flowers to the family in memory of Martin "Marty" Mynatt, please visit our flower store.