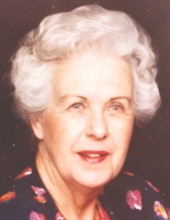 Cochran Funeral Home of Blairsville announces the death and funeral services for Mary Ruth Allison, who went to be with the Lord on January 17th, 2022.

"Nannie Ruth", or "Ruth", as she was known to family and friends, was born in Towns County, Georgia, in 1928, to Fanny and Lawrence Ingram. Ruth grew up in Young Harris, Georgia, and graduated from Towns County High School, where she was a basketball player. In 1946, she met and married the love of her life, Charles Rogers Allison, of Blairsville, Georgia, and together they began their life and headed to Corbin, Kentucky, and other locations.

Ruth was the perfect partner, homemaker, mother, grandmother and eventually, great grandmother. Ruth and Charles traveled in his early career in communications and electrical engineering and construction. They settled in Tucker, Georgia in 1955 and founded DeKalb Contracting Company and raised a family. They retired to Blairsville in 1977, and looked forward to being near family. Ruth loved her years of involvement in Eastern Star and served in several offices. She also volunteered at Union General Hospital with the Pink Ladie's Auxiliary for 30 plus years and received the President's Volunteer Service Lifetime Award in 2010 and 2012. She also served as a volunteer in their Thrift Store to raise funds for a Women's Shelter in Blairsville for Union County. Ruth was a volunteer for American Red Cross for blood drives. Ruth and Jessie Colwell partnered to start a Linen Shop in the Colwell Dress Store, which was a well-known store throughout the area and located on the square across from the courthouse. Ruth made many friends, and loved serving others. She gave unselfishly of her time. Ruth was an accomplished seamstress, sewing for her family the latest in fashions. Gardening was a special love of Ruth's, and along with Charles, they raised wonderful fruits and vegetables, which they graciously shared with their friends and family. Her grandchildren always enjoyed coming to visit and often would not want to leave. Ruth loved the Lord and was a longtime member of First Baptist Church of Blairsville. She especially enjoyed her Sunday School Class.

Services will be Saturday, January 22nd, 2022 at Cochran Funeral Home at 2:00 p.m. Visitation will be at 1:00 p.m. Masks please. Burial will be in Blairsville City Cemetery, where she will be laid to rest beside her beloved husband, Charles.

In lieu of flowers, donations may be made to First Baptist Church, 296 Blue Ridge Street, Blairsville, Georgia 30512; designated Children's Ministry.

Praise be to God for Ruth's life.

Arrangements have been entrusted to the care of Cochran Funeral Home of Blairsville. Please share your condolences and fond memories with the family online at www.cochranfuneralhomes.com.
To order memorial trees or send flowers to the family in memory of Mary Ruth Allison, please visit our flower store.