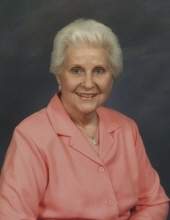 In the early hours of August 25th, 2021, Merry passed away at Union General Hospital following a brief period of declining health. She was 85 years old.

Merry Harbin was born in Auburn, GA on October 25th, 1935. She was the second child and only daughter of Inez R. and Ernest H. “Hoke” Harbin.

In 1940, Merry’s family moved into their long-time home of Macon, GA where they became neighbors and fast friends of the Smith family. Merry and Gene Smith were married in 1954. Merry and Gene proudly raised two sons, Jeffrey “Wendell” and Gregory “Greg” in Macon and later St. Petersburg, FL.

Mary was a gentle woman with strong beliefs. Her steadfast Christian faith and fierce love for her family were always at the center of her focus. Her persistence and sharp, creative mind ensured that she excelled in all her passions: sewing and silk flower arranging to name a few. Merry maintained an impeccable home and was an icon of ladylike class and southern sophistication in both appearance and demeanor. She loved travel, pink pigs, Nippon porcelain, guacamole, and the color turquoise. Merry delighted in the small things and never missed having her cup of coffee with supper.

Merry was preceded in death by her husband of over 50 years, Gene D. Smith, and their angel baby, Emily. She is survived by son, Wendell Smith of Blairsville, son Greg Smith (Meshelle) of Gainesville, FL, granddaughter Lindsay Smith Marconi (Nick) of Tallahassee, FL, brother, Larry Harbin of Cleveland, GA, and many nieces and nephews.

Arrangements are entrusted to Cochran Funeral Home & Crematory of Blairsville.
To order memorial trees or send flowers to the family in memory of Merrill "Merry" Smith, please visit our flower store.