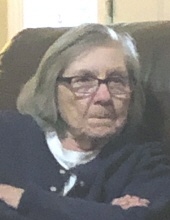 Cochran Funeral Home and Crematory of Blairsville announces graveside services for Mrs. Mildred Lance Baucom, 78, of Jefferson, Georgia, formerly of Blairsville, who passed away on Friday, September 11th, 2020 at home.

Mrs. Baucom was born in Blairsville, a daughter of the late Thomas Stanley Lance and the late Lora Pearl Richards Lance. Besides her parents, she was also preceded in death by her husband, John Wilce Baucom; a sister, Juanseal Lance Dowell, and a brother, Richmond Thomas Lance.

The family will meet with friends starting at 2:00 p.m. at Cochran Funeral Home in Blairsville on Saturday, September 12th.

Cochran Funeral Home and Crematory of Blairsville is honored to be serving the family of Mrs. Mildred Lance Baucom. Please share your condolences and sign the guest registry online at www.cochranfuneralhomes.com.
To order memorial trees or send flowers to the family in memory of Mildred Lance Baucom, please visit our flower store.