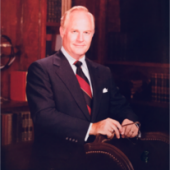 Murray Dennis Wood, age 87, a CPA and gentleman farmer of Blue Ridge and Atlanta, was lovingly cared for by his wife, Vivian, of almost 70 years and youngest daughter, Dr. Holly Brown of Buffalo, NY.
As a highly recruited graduate from the University of Alabama, he was hired by Ernst & Young, formerly Ernst & Ernst in Birmingham. With his skills in high demand, he was relocated to the Atlanta office in 1967 and then onto Orlando, Florida in 1969. In 1971 he was moved to Miami, Florida where he was made Partner responsible for the South Florida offices. While in Miami, he was President of the Miami Philharmonic, member of the Greater Miami Opera Association and the United Way of Miami.
After 5 years in Miami, he moved back to Atlanta and became Vice Chairman and Managing Partner for the Southeast Region for Ernst & Young. During his time in Atlanta he was on the Board of Directors for the United Way of Metropolitan Atlanta, Atlanta Arts Alliance, Atlanta Symphony Orchestra, the Atlanta Music Festival, the Metropolitan Opera Association, Scottish Rite Hospital, Peach Bowl, Salvation Army, Oglethorpe University. He served on Boards of the University of Miami, University of Florida and University of Alabama, was a Rotarian and treasurer of almost every church where he was a member.
After he retired from Ernst & Young, he was a member of the Lion's Club, Treasurer of the United Way of Yancy County, NC and in Blue Ridge, he completed the Master Gardner's Course and helped to start the Church garden at Cherry Log Christian Church, as well as being a Stephen Minister.
Preceded in death by his son, Craig, he is survived by his wife, Vivian, and loving father to Judy Talley (Jack), David Wood (Jane), Shelia Bryant, Holly Brown (Dennis). Proud grandfather of Mebbie Campbell (Cam), Catherine Anderson (Patrick), Vinson Bryant, Ginnie Killebrew (Douglas) and Michael David Wood. Great grandfather to Natalie and Matthew Anderson, Emma and Maggie Killebrew, Journee Bryant, and Jack Campbell.
In lieu of flowers, you may donate to the Cherry Log Christian Church or The Lane-Wood Scholarship, University of Alabama, Box 870122, Tuscaloosa, Alabama 35487.
Memorial Services will be held at Cherry Log Christian Church, 1149 Cherry Log St, Cherry Log, GA 30522 at 10:00 am on Wednesday, October 30, 2019.
To order memorial trees or send flowers to the family in memory of Murray Dennis Wood, please visit our flower store.