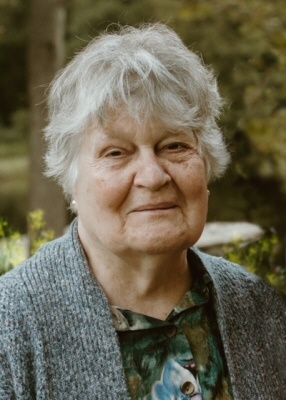 Peggy Louise (Geurin) Meredith went home to be with her Lord and Savior on February 20,

She is also survived by her sister, Patty Sue Davenport, and brother, Norris Isaac Geurin.

Peggy is preceded in death by her parents, Laura Bell (Wofford) Geurin and Smith Corbett

Peggy was born September 10, 1932 in a log cabin in Dover, Tennessee the seventh of nine

children. She began her education in a one-room schoolhouse and went on to graduate from

Murray State University with a degree in Education, working her way through school by waiting

tables. She taught for one year in a one-room schoolhouse in Tennessee, then independently

moved to Garden City, Michigan, where she taught first grade and met Bob Meredith. They

married on December 1, 1956, at the end of hunting season, and raised a family of four children

in Union Lake, Michigan. After Bob’s retirement from the Ford Motor Company in 1985, they

built their log home and settled in Blairsville, Georgia. She became an integral part of the

community through her work with Christian Women’s, AWANA, teaching Sunday school at Faith

Baptist and Grace Presbyterian, and 30 years as a volunteer counselor at Women’s Enrichment

Center. She shared her love for others—especially children—through a lifetime of giving.

She loved camping, playing Rook, wildflowers, welcoming others to her home for meals, her

In lieu of flowers, donations may be made to Women’s Enrichment Center at

To order memorial trees or send flowers to the family in memory of Peggy L. Meredith, please visit our flower store.