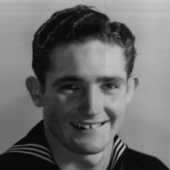 A Celebration of Mr. Reifschneider's Life will be held at 2 p.m. on Saturday, January 18, 2020 at Shepherd of the Hills Lutheran Church, 823 Forge Mill Rd, Morganton, GA 30560. Full Military Honors will be presented by the North Georgia Honor Guard.

On Sunday, November 10, 2019, Phillip "Phil" C. Reifschneider joined the Church Triumphant at his home on Lake Nottely, surrounded by his family. Phil enjoyed life, he adored his family, and he loved his wife of 68 years, Vivian.

Phil was born in Rapid City, South Dakota to John H. and Amy (Cramer) Reifschneider. He attended Highline High School in Burien, Washington, where he met Vivian in Speech class. During his junior year, Phil and two of his buddies decided to skip school one day, to sign up for the Navy. While in the Navy, Phil initially worked as an Aviation Metalsmith and later in Hydraulics. He eventually became a Plane Captain, where he was responsible for the care and maintenance of his Corsair fighter-bomber aircraft. His squadron was assigned to the aircraft carrier USS Philippine Sea which was deployed during the Korean Conflict. During a one-month leave, he married Vivian on April 21, 1951. Phil was honorably discharged from the Navy in December of 1951, having earned a Good Conduct medal, and his high school diploma.

The discipline he learned in the Navy, combined with his intelligence, determination, work ethic, free spirit, incredible sense of humor, and willingness to question authority and challenge conventional wisdom, guided him through a truly remarkable career. As a young boy during the Depression, he worked any job he could find to help support his family. Forever grounded by those humble beginnings, he would ultimately achieve the quintessential American Dream.

After leaving the Navy, Phil worked at a few different places. One of them was as a Millwright in Longview, Washington. At the suggestion of Vivian's uncle, he went to the local union hall, where he paid the $125 initiation fee. In return they gave him a Journeyman's card. He did not know what a Journeyman was, and looked it up in the dictionary. Upon learning its meaning, Phil decided he was up to the challenge. As part of his job duties, he installed machinery, which he described as a "a piece of cake." It was decent money when there was work, but there often was not enough work for everyone. When Phil raised questions with the leadership regarding a lack of assignments, he was promptly kicked out of the union.

During his time as a Journeyman, he became interested in accounting. To further his education, he moved the family back to Seattle and enrolled in a business college, utilizing the G.I. Bill. Phil took all the courses they had to offer in business and accounting, and joined the National Biscuit Company, "Nabisco" on June 1, 1954.

Phil would stay with Nabisco until he retired in 1986. He held many different positions over the years. He started as a Jr. Clerk and worked his way up to Director of Commodities. He was passionate about his work. Family vacations often included detours to farms, to evaluate and purchase wheat for the company's products. He was ultimately elevated to Managing Director of Global Procurement, Ltd. (International Trading Corp.), and he served as the President of NISCO, Inc., which was responsible for date operations in the Middle East.

Phil and Vivian were transferred several times with Nabisco. They lived in Portland, Oregon; Spokane, Washington; Buffalo, New York; and Whippany, New Jersey. His corporate travel took him all over the world. At one point, he had an office in West Sussex, England. He would also spend ten weeks out of the year in Iran and Iraq for the date harvest.

After being retired for a few years, Phil joined Mission Builders with the Evangelical Lutheran Church of America. He and Vivian assisted in building three churches including one in Mount Pleasant, South Carolina, and one in Huntsville, Tennessee. When they arrived in Morganton, Georgia, to build the third church, they never left. The mountains reminded them of the Pacific Northwest. They sold the house they meticulously built in Venice, Florida, and purchased the home that would be affectionately referred to as, "The Inn on the Lake", in Blairsville.

Being on the Lake Nottely waterfront, with a view of Brasstown Bald, the "Inn on the Lake" quickly became a summer destination for his and Vivian's large family. They loved to entertain. Phil reveled in being the captain of his speed boat and his pontoon boat. He enjoyed relaxing on the deck where he could watch the hummingbirds, and his grandchildren and great grandchildren play in the lake. He was a great story teller and would recount his adventures, years later, in great detail.

Never content with staying in one place for too long, Phil enjoyed traversing across the country with Vivian, in their motorhome. Their travels afforded them the opportunity to visit family and old friends, and make many new friends along the way.

Phil was also very active in the church, serving on various committees and lending a helping hand whenever needed.

Phil had a long and valiant battle with cancer. At many difficult moments during his treatment, he would smile and say, "We have to be optimistic about these things." His faith never wavered.

Phil was preceded in death by his parents, and by his siblings, Amy "Bunny" Dando of Birdsview, Washington, and CDR. John "Jack" Reifschneider, USN, Retired of Lacey, Washington.

Phil's quick wit and gentle spirit are already greatly missed by his beloved Vivian, and their children Karl Phillip and Arleen Reifschneider of Lockport, NY; Janet and Tyler Goodberry of Charlotte, NC; and Caroline "Kelly" and Richard Totten of Duluth, GA.

A celebration of Phil's life will be held on Saturday, January 18, 2020 at 2pm at Shepherd of the Hills Lutheran Church, 823 Forge Mill Road, Morganton, GA 30560. All who knew him are invited to attend and share stories about him, or how he touched their lives. If you are unable to attend and have something to share, please contact Karl Reifschneider at gig.meister.bswny@gmail.com.

In lieu of flowers, please consider a donation to Phil's church, Shepherd of the Hills Lutheran Church (address above) or to ELCA World Hunger, a charity Phil supported after seeing so many hungry children overseas; (https://www.elca.org/Our-Work/Relief-and-Development/ELCA-World-Hunger/Ways-to-Give).
To order memorial trees or send flowers to the family in memory of Phillip Cramer Reifschneider, please visit our flower store.

Shepherd of the Hills Lutheran Church