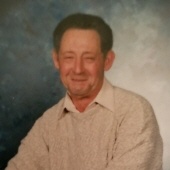 Herman Quinton Davenport, age 87, of Morganton, passed away Monday, April 20, 2020, at his home. Mr. Davenport was born September 25, 1932, in Morganton, GA, to the late Herman Davenport and the late Elsie Bryan Davenport. He was a member of Maple Grove Baptist Church and was a lifelong resident of Morganton. Quinton worked for over 60 years operating a service station in Morganton from 1957 to 1977. In 1977, he bought the station and continued to operate it until his retirement. He enjoyed working with cattle and gardening. Quinton was known by many people as a faithful friend and always willing to help those in need. He was preceded in death by his father, Herman Davenport, and mother, Elsie Bryan Davenport and brother Cline Davenport.

Arrangements entrusted to the Henry-Cochran Funeral Home of Blue Ridge, GA. You may send condolences to the family and sign the guest register at www.cochranfuneralhomes.com.
To order memorial trees or send flowers to the family in memory of Quinton Davenport, please visit our flower store.