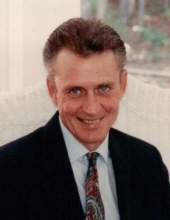 Cochran Funeral Home of Blairsville announces the death and funeral services for Mr. Reid H. Colwell, native and lifelong resident of Blairsville, who passed away on Sunday, April 18th, 2021 in Blairsville.

Reid Harold Colwell was born February 1, 1944 in Blairsville, Georgia. He was the third son of Horace and Edna Colwell, younger brother to Haskin and Vaughn Colwell. Reid was widely known as an intelligent, curious, witty person who knew a little bit about everything. He grew up taking apart and putting back together anything he could get his hands on. Reid left home at 18 and was employed in the communications industry for the next 30 years. Though not formally educated as an engineer, Reid became one of the most respected members of that community in the southeast, working for many years at Engineering Associates. Long after his retirement, he remained abreast of the happenings in the communication industry, sharing his knowledge with anyone who would listen. Reid was a people-person, intensely interested in those around him. Shopping trips usually ended when Dora would find him talking to some random stranger--who was a stranger no more. Reid would know more details about a person after spending a few minutes with them while waiting than many would ever know. Friends of his children, Paige and Joe, often regarded Reid as a friend and advisor more than a parental figure. Reid loved Dora and the kids with his whole heart and seemed to know just the right balance between giving advice and letting his children figure things out on their own. He parented his children with wisdom, humor, and common sense and his grandchildren enjoyed being loyal assistants, both in odd jobs and the occasional prank. For friends, family, and co-workers, Reid was the go-to when something needed to be built, fixed, or consulted on.

Reid is survived by his wife of 54 years, Dora McCarter Colwell; daughter and son-in-law, Paige Colwell Swartz and Toby Swartz, son and daughter-in-law, Joe Colwell and Rhonda Dyer Colwell; and brother and sister-in-law, Haskin Colwell and Austine Plott Colwell. Beloved grandchildren to “Pop” include Carter Lane Colwell (first grandchild, always especially close to his heart), Ezekiel Von Swartz (first grandson, answer to many prayers), Cooper Brent Colwell (second grandson, frequent companion and story swapper), and Sofia Hope Swartz (youngest grandchild, inheritor of many of her Pop's distinguishing characteristics). Reid was preceded in death by his parents, Horace and Edna Colwell, and his older brother, Vaughn. Reid was a member of Mount Pleasant Baptist Church, where he served as a Deacon for many years. He was a born-again Christian who had been led to Jesus by his faithful mother, Edna. Reid was a lifelong vocal Democrat and loved to talk to anyone about politics. He also loved NASCAR and baseball. Reid leaves a legacy of faith, honor, tenacity, humor, and intelligence. He will be sorely missed and never forgotten.

Funeral services have been scheduled for Wednesday, April 21st, 2021, to be held at 4:00 p.m. in the Chapel of Cochran Funeral Home in Blairsville, with Rev. Kenny Beavers and Rev. Dwayne Patterson officiating. Special music will be presented by Kelly Helton and Scott Lance. The following gentlemen have been requested to serve as pallbearers: Butch Harkins, Bill McCarter, Jeff McCarter, Daniel Davenport, Leslie Groves, and Jamie King. Burial will be in Mt. Pleasant #1 Baptist Church Cemetery.

Arrangements have been entrusted to the care of Cochran Funeral Home of Blairsville. Please share your condolences and fond memories online at www.cochranfuneralhomes.com.
To order memorial trees or send flowers to the family in memory of Reid H Colwell, please visit our flower store.