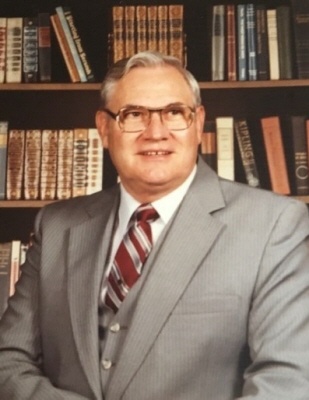 Cochran Funeral Home of Blairsville announces the death and funeral services for Rev. Bethel A. Buchanan, age 95, of Blairsville, Georgia, who passed away on Wednesday, March 16th, 2022, in Union County Nursing Home in Blairsville.

Rev. Buchanan was born in Henegar, Alabama, a son of the late Andrew V. Buchanan and the late Burma Aby Moore Buchanan. He was a veteran of the U.S. Navy, and served in the China Sea during World War II on a naval repair vessel, the USS Mindanao, as a Motor Machinist's Mate. While in service to his country, Rev. Buchanan received numerous medals: Seventh Fleet Commendation Medal; Presidential WWII Appreciation Medal; Pacific Campaign Medal; National Defense Service Medal; Good Conduct Medal; and Sharpshooters Medal. Rev. Buchanan's service was recognized when he received a Quilt of Valor for his military service in 2014. He had lived in Blairsville since 1966, and served as Pastor of First Baptist Church of Blairsville for 22 years, from 1966 until 1988. He was a member of Allegheny Masonic Lodge. Rev. Buchanan was a pilot, and flew his Cessna during his ministry. He was preceded in death by his beloved wife, Alice, and they celebrated 56 years of marriage before she passed in 2002. Besides his parents, he was preceded in death by sisters: Betty Nolan and Sue Reed; and an infant brother, Anthon Buchanan. Rev. Buchanan was a very gifted musician, and could play just about any stringed instrument, and in later years, he learned to play the harmonica.

In lieu of flowers, the family has suggested memorial donations be made to First Baptist Church of Blairsville, P.O. Box 2058, Blairsville, Georgia 30514.

Arrangements have been entrusted to the care of Cochran Funeral Home of Blairsville. Please share your memories and sign the online guest registry at www.cochranfuneralhomes.com.

To order memorial trees or send flowers to the family in memory of Rev. Bethel A. Buchanan, please visit our flower store.