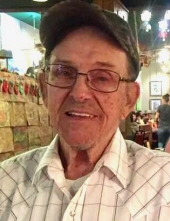 Mr. Berry was born in Atlanta, Georgia on August 30, 1934 to the late Raymond and Evelyn Berry. He enlisted in the U.S. Navy at the age of 17 and proudly fought in the Korean War. He later became an aircraft sheet metal mechanic and spent 20 years with Eastern Airlines. Known for his ingenuity, Mr. Berry and friends loved to work on American made cars- even creating a propane powered conversion during the 70’s when gasoline was scarce.
Some favorite pastimes included playing golf, fishing, and watching the Atlanta Braves play baseball. He loved the mountains. Mr. Berry held to Masonic traditions of making good men better. He would have received his 50 year pin in June and was an active member/ past-master of Oleeta West-Dade Lodge #145 in Miami Springs.

He will be warmly remembered by all who knew him, but especially missed by his family: loving wife of 53 years, Doris Gentry Berry; daughter, Mira Berry; granddaughter, Alexandra Berry; and his beloved yellow lab-mix, Sam.

Funeral Services will be held at 1:00 p.m. from the Chapel of Cochran Funeral Home. Special Music will be presented by Derek & Charlotte Tilley. Military Honors will be presented by the American Legion Honor Guard. Masonic Rites will be performed by Montgomery Lodge #426. The family will receive friends at the funeral home from noon until the service begins.

In lieu of flowers, memorial donations may be made to: Children's Healthcare of Atlanta- Scottish Rite Hospital online at give.choa.org
To order memorial trees or send flowers to the family in memory of Robert Gordon Berry, please visit our flower store.