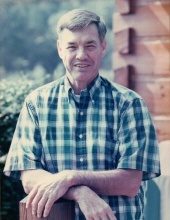 Larry was born on December 2nd, 1946 in Chandler, IN the son of Jesse and Mildred Ashley. Larry Graduated from Castle High School in 1964 and joined the United States Marine Corp the same year. Larry was a very proud Marine and Vietnam veteran. Larry had a very exciting and rewarding career for 31 years working in Atlanta for Delta Air Lines. Larry and Brenda lived in Marietta, GA for 30 years and after he retired they moved to wonderful Blairsville, GA in January of 2000. While living in Blairsville, Larry was employed by Home Depot for 13 years.

To honor his wishes, Larry will be cremated and no services are planned.

In lieu of flowers, please consider a memorial donation to the Humane Society Mountain Shelter at PO Box 1252 Blairsville, GA 30512.

Arrangements are entrusted to the Cochran Funeral Home of Hiawassee.
To order memorial trees or send flowers to the family in memory of Robert Larry Ashley, please visit our flower store.