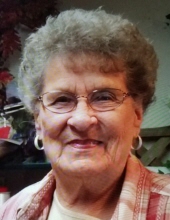 Cochran Funeral Home and Crematory of Blairsville announces the death of Mrs. Rose M. Davis, 85, of Blairsville, formerly of Miami, Florida, who passed away on Saturday, December 19th, 2020 after a brief battle with cancer. She was born on December 28, 1934 to the late Clyde and Antoinette Markowski. She was a long time member of Providence United Methodist Church.

She was a long time resident of Blairsville, GA having moved here from Miami, FL in 1975.

She had a career at Southern Bell in Miami prior to moving to Blairsville where she was then employed by Aviagen, formerly Arbor Acres, for many years until her retirement.

She enjoyed spending time with her family and traveling with the Golden Club. She also enjoyed crocheting and making crafts for the Sorghum Festival where she had a booth with her daughter for 19 years.

Cochran Funeral Home of Blairsville is in charge of arrangements.
To order memorial trees or send flowers to the family in memory of Rose Markowski Davis, please visit our flower store.