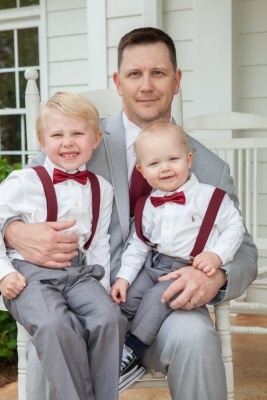 Steven Allen Mathews, age 44 of Blue Ridge, GA passed away peacefully June 13, 2021 at Emory University Hospital surrounded by his family after a long battle with cancer. Mr. Mathews was born December 25, 1976 in Athens, GA to James Mathews and Deborah Hogan. A member of Pleasant Hill Baptist Church in Mineral Bluff, GA, he was preceded in death by his grandparents, Robert & Mae Butts and Alton & Willie Delle Mathews; and his grandmother, Madge Wait. Steve graduated from Oglethorpe County High School in Lexington, GA in 1995 and served four years active duty in the U.S. Air Force and another six years as Air Force Reserve. He worked for Verizon Communication in Virginia Beach for ten years before entering the Fire Academy where he graduated with the Top Rungs Award. He worked as a firefighter for the Gwinnett County Fire Department at Station 5-C for eight years. Steve loved the Lord and his family with his wife and two sons who meant the world to him. He enjoyed tailgating and going to Georgia Bulldogs football games and Atlanta Braves games as well as scuba diving, the outdoors, mountain biking, snow boarding, water skiing, all kinds of sports, and riding his Harley Davidson motorcycle. He especially enjoyed being on the lake with his family and cooking for the fire department. He will be missed by all who knew him.

In lieu of flowers, please make memorial donations to the trust fund set up for children Tucker and Parker Mathews at BB&T Bank in Blue Ridge or donate directly to the family.

Arrangements entrusted to the Henry-Cochran Funeral Home of Blue Ridge, GA. You may send condolences to the family and sign the guest register at www.cochranfuneralhomes.com.
To order memorial trees or send flowers to the family in memory of Steven Allen Mathews, please visit our flower store.