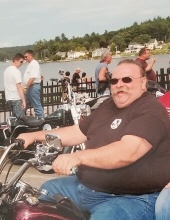 The Cochran Funeral Home & Crematory of Blairsville announces the death of Victor A. Beaudry, who passed away on December 4th, 2021 at the age of 68.

Victor, or "Vic", was the kind of man you could really get along with, it was harder to not like him rather than it was to like him. In his life he had made many friends along the way, moving from Connecticut to Georgia.

As much as he loved all sorts of animals in the world, the most important one to him was his dog Daisy, who was his baby. Now, if it were up to "Vic", their home would be filled from corner to corner with stray cats that he would house. That was just how much love he held in his heart for the ones he barely knew and for the ones that he did. "Vic" also loved his motorcycle "Thelma" and his 1970 Dodge Superbee. He was deemed a man who could fix about anything that had an engine. He was a lively fan of NASCAR, Dale Sr. ,and most recently, Chase Elliot. Along with his many other interests in life, he also loved food. He was widely known for his "Chowdahfest", the annual Clam Bake he held for all his family and friends to enjoy.

However, with all the love he had for his hobbies, the one love he held greatly was for his Granddaughter, Gabriella or "Gabby". She was the light of his life and was the inspiration for his move down to Georgia from Connecticut, just so he could see her more often. Nevertheless, his heart was still spared to all who was apart of his life and will be missed by many who knew him. He had a great love for life and made it special for those who knew him. Ride with the angels now.

He will be warmly remembered by all who knew him, but especially missed by: his loving wife, Janice Perry; his children, Julie N. Beaudry Owens (John), David Thompson (Tabitha), and Noah M. Beaudry; and his grandchildren, Sadie, Jack, Gabriella "Gabby", Cameron, EJ, Leta, Sissy, and Elaina; his aunt, Lorraine Jarosz. He was preceded in death by his parents, Victor J. Beaudry and Dorothy Audette Beaudry.

A Gathering of Remembrances will be held at a later date.
To order memorial trees or send flowers to the family in memory of Victor Adrian Beaudry, please visit our flower store.