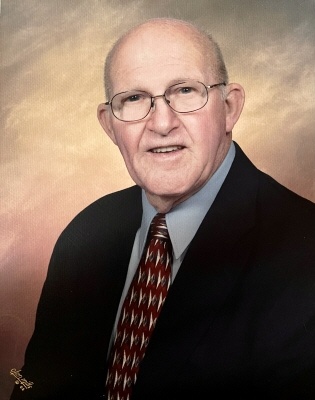 William A. “Bill” Bodenheimer, 89, passed away on Sunday, October 31, 2021, at his home in Mineral Bluff, Georgia. William was born January 30, 1932, in Thomasville, North Carolina, to the late Hal M Bodenheimer and the late Oppie Saunders Bodenheimer. For the last few years, he was a resident of Mineral Bluff, Georgia. He was a former resident of Auburndale and Lakeland, Florida.
William was a lifelong plant mechanic and machinery line builder for Florida Tile Industries, Food Machinery Corporation, and Ewell Concrete. He served his country in the Korean War assigned to the United States Army, and was honorably discharged. William loved sports and played softball for many years in a men’s league. He hung up his glove to coach Little League baseball while his son played. In his later years, William loved to attend his granddaughter’s softball games, rarely missing one. William also loved to fish, particularly enjoying trips and fishing with his children and their families. For the last few years, William moved to the mountains of North Georgia, where he loved to fish, watch the deer walk through his woods, and observe the change of the fall leaves. He was called Pops in his later years and became quite the beloved man in his mountain home. After being married 54 years, William was predeceased by his wife, Ruth, in 2016. He is survived by his daughter, Anna Kestner (Mark); son, Art Bodenheimer (Pam); grandchildren, Laura
Lemon (Aaron) and Leslie Hilton; great-grandchild Cayden Hilton, and five beloved nieces and nephews.
Viewing and visitation will be Saturday, November 6, 2021, from 2:30 pm to 3:00 pm, with a funeral service to follow at 3:00 pm in the chapel at Lakeland Funeral Home and Memorial Gardens, 2125 South Bartow Hwy, Lakeland, FL 33801. A graveside service will immediately follow in the Memorial Gardens.
Arrangements entrusted to the Henry-Cochran Funeral Home of Blue Ridge, GA. You may send condolences to the family and sign the guest register at www.cochranfuneralhomes.com
To order memorial trees or send flowers to the family in memory of William Arthur Bodenheimer, please visit our flower store.